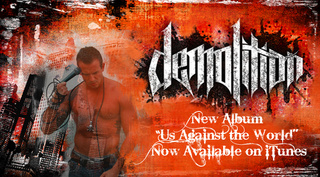 fresh new act has stepped up to enlighten a whole new generation not just of Irish decent. After recently releasing their debut album in Japan Us Against the World, DEMOLITION is out to demolish (pun intended!) stereotypes, bling bling, and everything else that has infected Music to bring their own flavor the game.To an ignorant ear, one would say that DEMOLITIONS sound from their Japanese hit singles Get Down or Throw Your Hands Up is nothing more then a second crack at nu metal. In reality, Demolitions Punk Rap sound is a reaction to the current state of Hip Hop/Rap. This backlash resonance is real, clever, raunchy and filled with angst! All the while Demo keeps its roots of true New York Hip Hop, lyrically being at its highest level. For those who can see beyond the haze of the current copy-cat mainstream genre, know that a storm is brewing.

In their debut release Us Against the World, Demolition seems to come out swinging with a 1-2 punch of lead vocalist Euyos amazing flow illustrating brutal honesty, complemented by DJ Dramas violent and raw production. Euyo born Eugene OMeara (Bronx NY) depicts the quintessential artist whose inspiration comes from his torment with demons and troubled background. The stocky first generation Irishmen with a taste for the drink and a quick temper could be compared to Eminem in terms of tone at first but dont be mistaken he is his own man. An incredible hook writer and lyricist, Euyo writes about whom he is, real situations and not portraying himself as some thug. The Irish pride and story telling pours from each track forcing you to relate to him in some way.

DJ Jimmy Drama (born James Blomquist, Jamestown NY) is the veteran and stability underneath the ferocity of DEMOLITION. A musician since 1990 a well as former tour Dj for Interscope/Motown recording artist Queen Pen for years brings passion and musicianship to the group that is prominent in his work

The outcome of House of Pain pride mixed with Beastie Boys enthusiasm and the lyrical viciousness of Eminem, DEMOLITION has brought that much needed spark to light a fire under the ASS of Music.