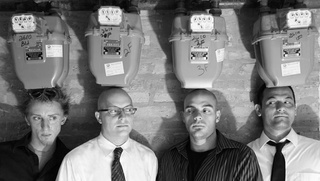 Doppler Shift fuses the uptempo art of live drumNbass with pounding rock, danceable funk grooves & a jazz sensibility. Many bands claim originality, but Doppler Shift puts its money where its mouth is. Take a listen to Resistor, Rule No. 8, and a smoking cover of Dave Brubeck’s Blue Rondo a la Turk from their latest release “Resistor.”

Since celebrating the release of “Resistor” on IZM Records in June 2008, Doppler Shift takes aim at the larger picture: regional touring, festivals, and working to become one of the most recognized motley brews to spring from the eclectic Chicago underground.

-------------------------------------
"just enough rock aggression and rhythmic raucousness to appeal to this generally jazz-averse rockist...explore[s] the intersection of jazz, funk, rock, and experimental music at their most extreme. The band is following in heavy footsteps in this endeavor--the Vandermark 5, George Clinton, Miles Davis and the Stooges of "Funhouse" have all aspired to the same--but it more than holds its own on "Resistor," the group's extremely impressive second album..." - jim derogatis, chicago sun-times