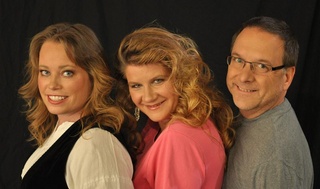 About East of Innocence

East of Innocence (EOI), of St. Paul, MN, embarked as a powerfully harmonic duo. Their potent vocals are reminiscent of Guster combined with eclectic Liz Phair-like lyrics and the musical dynamics of Evanescence.

Marcy Vonne’ and Jennifer VonGroven met under curious circumstances at a local dive bar in 2002 and began singing together the next day. EOI revels in its live performance banter amongst audience members or simply between the two of them.

They spent years trying to break the stereotype that “acoustic” and “folk” are one and the same, surrendering recently to a righteous lead guitarist, Mr. Dean Jeffreys. Their latest album (unGlued - released November 2008) demonstrates diverse genres, saluting; rock, blues, pop and the sporadic drinking song - while still paying homage to EOI’s deep foundation of soulful harmonies. The track “Hold On” showcases their vocal balance, perhaps second only to their live performances.