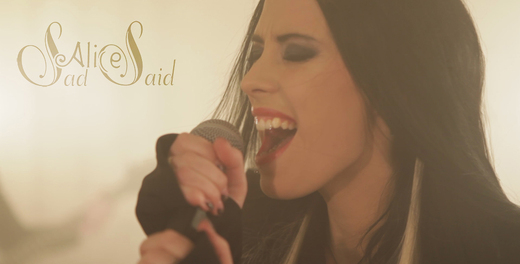 Sad Alice Said started by Alisa Shakor in 2005 originally as all-female band under the name Alice in Wonderland.
Shortly after due to the first line-up changes guitarist Pavel Lihotvor and then his brother Sergey Lihotvor joined the band.
For two years the band changed keyboardists and drummers but the basis was invariable: founding member, singer/guitarist Alisa (the only original member who has remained), guitarist Pavel and bassist Sergey.
Current line-up is stable more than a year and from February 2011 the band is working under the name Sad Alice Said.

Musicians describe their sound as gothic metal/rock
The main themes of the songs are about time, human feelings as reflection of the real life experiences, philosophical questions.

At the moment Sad Alice Said have new video made for the new song "Open Your Eyes" and released the debut ЕР "Clock of eternity" based on the old songs.
Also the band is preparing to record the LP where the newer (more sympho-oriented) material will be released.