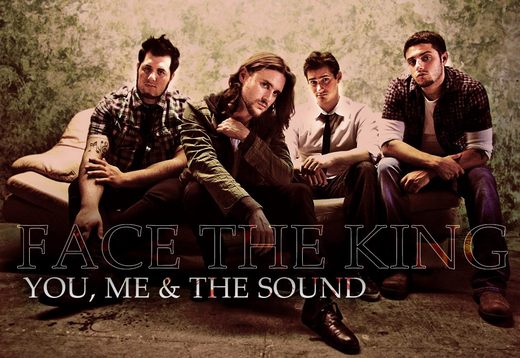 About Face The King

Face The King is an independent alternative hard rock band based out of New York, that has redefined the NY rock scene with their arena size sound both live and on record. In the two and half years that Face The King has been together, they have compiled a list of support from sponsors Vox, Blackstar, Korg, Spector, Pigtronix, and most recently TC Helicon. These high powered sponsors enabled Face The King to fly across the country to play for NAMM 2012 in front of the entire music industry.

Face the King is Eric Zirlinger (singer/guitarist/keyboardist), Dan DelVecchio (lead guitar, backup vocals), Joey Dammacco (bass, backup vocals), and Randy Palumbo (Drums). Their most recent EP, “The Burning & The Falling Down,” produced by Steve Haigler (Brand New, The Pixies, Fuel) has received critical praise and glowing reviews both in print, the web, and local/out of state radio. Reviews such as Playgroundz.net who stated the ”Face The King is an adventure waiting to be unleashed. The Burning & The Falling Down features 5 tracks that take the listener on a voyage. As you listen you’re taken out of your reality and into the music. Face The King is an intense sonic experience that you will never forget.”

Currently finishing up their new EP, Face The King will be touring the tri-state area during the summer of 2012, starting with a sold out show at Gramercy Theater at the end of March. Face The King is ready to take the stage this summer - promising to offer a show and an EP worth every bit of the hard earned money people work for every day. The summer of 2012 will be Face The King’s summer - with a new record, new fans, new venues, but the same work ethic that has gotten them this far. Face The King is not waiting for a label to hand them a deal – they are earning it the way it was meant to be earned… by hitting the road and making new fans
Face The King invites everyone to listen to the new EP and to come and sing along at shows, believing that the live show is an experience that is shared between the band and the audience.  Currently playing to packed houses all around the NY Tri State Area, Face The King is earning the reputation as a band you need to experience live.