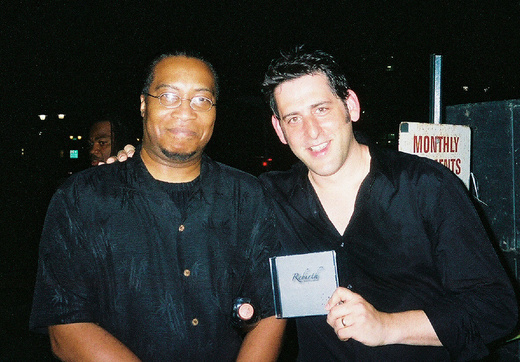 Born in The State of Wisconsin (USA)* and raised in The City of Milwaukee....Home of The Milwaukee Braves/Brewers/Bucks, The Green Bay Packers *(Go Pack Go!!)*, The Miller Brewing Co. and Harley-Davidson Motorcycles on October 29th,1955....SSP Recordings featured ~ Recording Artist...Percussionist/Vocalist/Composer/Producer ~ Felix Langford, began his musical journey at the age of 11, taking violin lessons in Jr.High. At that time, the violin was not a “Cool” instrument in his neighborhood and he was teased constantly....(and those "black-rimmed nerdy glasses", didn't help the situation at all!!)* So..........Felix turned his violin case around......carrying it like it was a saxophone.......He didn't fool anyone, but himself. As far as music was concerned......Felix always loved to sing songs about love and learned a lot while listening to his older sisters, Frances,(who sang like "Diana Ross")(RIP)* and Delois,(who dreamed of being an opera singer)*, singing around the house!!!....Also, each and every Sunday Morning, while getting ready for church, his father, Fred(RIP)* would always play the local radio stations gospel show!!! Felix even did a stint in the Youth's Gospel Choir at the neighborhood Baptist Church on 35th St.!!! *(Stevie Wonder's,"I WISH", brings back lots of memories!!!)*

At 13, Felix fell in love with the art of percussion and credits his older brother, John ,“Doc”, as he was nicknamed....as the one responsible for teaching him the basic beats and exposing his ears to some of the hippest , innovative cats on the jazz scene. Trendsetters like....Coltrane,Miles,Dizzy,Monk,Candido,Charlie Parker,Wes Montgomery,Grant Green,Herbie Hancock,Chick Corea and Mongo Santamaria...just to name a few!! ("Love ya,Doc"!!)* Also ,jammin' alongside childhood friends,*Pablo "Cuco" Ramos(RIP)*,"Cele" Perez,Willie Silva and other Latin Compadres on "The Hill", was a daily ritual. It was at 15, playing only one conga, that Felix joined his first band..."The Oddyssey Band" , a redhot 10 piece cover band that included his younger brother,Herb (lil' Jimi Hendrix) on lead guitar and cousin, Mike Moon on Bass and a full *(Baddasss)* horn section, just like EWF's "Phoenix Horns" and the "Tower Of Power" Horns!!! They went on to win many "Battle of the Bands" competitions!!!!

Along with all the multitude of talented artists,back in the day, "The Motown Sound", "The Philly Sound" and "The Fania All-Stars",etc;also touched Felix,but,of all the groups,“The Elements of The Universe-Earth,Wind And Fire!”, have remained at the top of Felix’s list,“The Baddest Band in the Land!” Big Ups to Maurice White,Philip Bailey,Verdine White and the rest of “The Fellas.” Felix has performed with many bands over the years in many different genres of music; reggae, r&b, blues, rock, jazz and salsa,etc; @ “Summerfest, African World Festival and Jazz in the Park”,opening for R&B Legends,“Smokey (Bill) Robinson”,“The Dramatics” with *Guitarist/Vocalist-Willie "Duchie" Rogers(RIP)*, “Freddy (Rock Me Tonight) Jackson” and also Jazz Great-Saxophonist-“Najee”. But,performing with Jazz Great-Guitarist-“Nick Colionne” was the turning point for Felix.....He would never be the same....."Thanks Nico"!!!

Although he did study voice @ The Wisconsin Conservatory of Music and Music Theory and Piano @ M.A.T.C. Felix is basically a self-taught musician...Learning by ear!!! Felix says, "It's really all about how the music makes you feel!!! I know classically trained musicians who can play the hell out of Bach,Beethovan and Mozart ,but, when asked to write an original composition ,they are truly lost.....That's strange to me!!! I guess I wouldn't have it any other way.....Music is truly a personal thing...when it comes to writing and even listening!!! It's all about what you feel as a person!!! Just as the great composers wrote their symphonies...That's what they themselves were feeling at the time they wrote them....It's a personal.....individual thing!!!! So, it is with my music!!!!"

When asked why he chose to start writing his own music......Felix says,"The percussionist is always the first to go......when a band needs to cut costs. I just got tired of being cut , just when you feel like you belong. So,I was pushed , more or less , into the direction of writing music. It’s funny, when you hear most recordings almost every song has some form of percussion in it , but , see a band live and you won’t see a percussionist (only the drummer gets some,dig?)...Big,Big Ups to “The Almighty” because with the creation of music workstations,sequencers and digital recorders , I can write all the grooves I hear in my head!!"....Now the world can experience the Joy that Felix brings in his music with the release of his first self-produced CD titled,“Rebirth”, 13 songs(over 75min.) of love. Felix says, “It’s not so much about me , you see.....It’s all about the music!”(Enjoy!) *** Be on the LOOK-OUT for his 2nd CD titled ,"Can We Dance?" Coming in 2011/12!!! ***