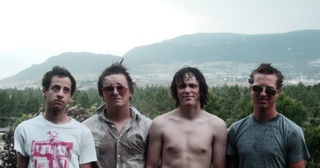 About Fields of Green

Fields of Green has burst onto the local music scene. In just 9 months they have gained an excellent reputation and made instant fans of everyone who watches them. FOG's first live performance was at New Music West in Vancouver. They followed that up by getting to the finals of the 2008 Rockanagan Music Festival in Kelowna.
They have shared the stage with The Cruzero's, Maurice, We Are the City, Alphababy, Laura Smith, The Sleddogs and The Left among others. Fields of Green recently signed a recording contract with new label Tree Fort Music based in West Kelowna. They are currently recording their first full length CD and expect to tour Canada in support of the new project beginning in summer 2009.
Fields of Green have a variety of influences including Radiohead, Coldplay and Muse.