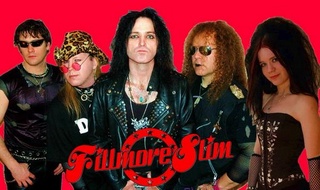 Fillmore Slim Has been around since 2002 and has had a few member changes along the way, in fact have had every member changed over the years but the band wasn’t able to achieve who they have become until the return of Founding member Jerri Allen in mid 2006 The band still continues in the bluesy LA style that they set out for in 2002 but at a much higher level of comradery as they have taken some of the older songs written by Dave Blitz and mixed with the newer songs written by the current line up, Broken Doll’s, Pimp of the world (written about the man who the band was named after an Idea that Billy the singer for the band since June of 2006 came up with during the writing for the new CD in late 2006 ) and Devils Swing plus a few others that the band plays live but are currently still working on in the studio. so all the new material that was written from late 2006 on was created, thought of and written by the current line up. no members that were in the band prior to that time had any influence or input into the newer songs, no matter how badly they wish that to be. The band is still writing a few more songs for the new CD which should be finished by late 2007 or early 2008