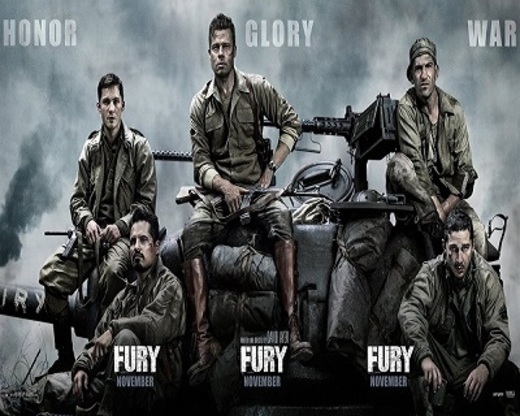 April, 1945. As the Allies make their final push in the European Theatre, a battle-hardened army sergeant named Wardaddy commands a Sherman tank and her five-man crew on a deadly mission behind enemy lines. Out-numbered, out-gunned, and with a rookie soldier thrust into their platoon, Wardaddy and his men face overwhelming odds in their heroic attempts to strike at the heart of Nazi Germany.

Makers of World War II drama Fury have just released a behind-the-scenes clip which reveals the amount of effort involved into creating the authentic feel of this highly-anticipated movie. Brad Pitt's latest feature will have its European premiere at the BFI London Film Festival on October 19, two days after its US release on October 17.

The featurette titled Recreating Hell abounds in epithets such as "honest", "authentic" and "original". Everyone involved in the making of the film, from director and writer David Ayer, to producer Bill Block as well as hair and make-up artists and costume designers, speak about their role in making a movie that "reproduces history". The film aims to delve deep into the "brutal dirty business" of warfare and "show the physical impact of what happened" to the five-strong Sherman tank crew led by Brad Pitt's character Wardaddy. The best part? They strived to do all that while staving off the pitfalls and avoiding to make a film that "wraps itself in glorious propaganda".

But visually, the most exciting bit is that everything is old-school. "There's nothing digital about this. Real tanks. Real uniforms and equipment. All of it shot in the actual mud, rain and pain of winter Europe," Block says in the clip. Indeed, in order to give the many scenes featuring the crew's tank, which Wardaddy once affectionately calls "home", a real feel, Ayer lent a real Second World War tank, the last working Tiger tank, from the Tank Museum in Dorset. Fury was shot in England, in Shirburn, Oxfordshire.

Another interesting thing - that did not make its way into the featurette though - is the fact that Shia LaBeouf, who plays Boyd 'Bible' Swan and opens the clip with the ominous words "Wait until you see what a man can do to another man…", has used the method approach during the filming. Reportedly, he didn't wash for weeks during the filming.

Both Brad Pitt and David Ayer, who, incidentally, is the man who penned the script for Oscar-winning thriller Training Day, (2001), are expected to attend the film's London premiere.
by eaonfox on October 14, 2014 at 11:56 AM EDT