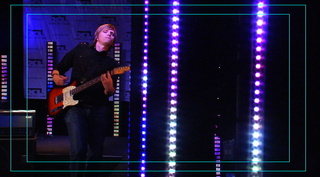 Jason Lee McKinney has been the “next big thing” since he started writing and recording
music, but life has always intervened: now, McKinney is writing about that life,
and it is more real and powerful than ever.
He is the type of musician who is becoming the face of the new music business:
a vocalist, guitarist, and songwriter. He has been signed to two major record
deals with two different bands—SpinAround and Lost Anthem—and worked with music
legends such as Tommy Sims (Garth Brooks, Bruce Springsteen, and Eric Clapton).
He has played over 1,500 shows, released five full-length albums and two EPs, and
had four moderate hits on three different charts.
In fact, it is hard to imagine that with as much as he has worked and recorded,
McKinney is not a household name yet. However, in 2006 while Lost Anthem was recording
a new album, McKinney suffered two of life's biggest losses on the heels of
each other: first, his father died of cancer; and then, his high school sweetheart and
wife of fourteen years filed for divorce. It seemed like the music left him, too.
For the first time since the age of ten McKinney was not involved with music—
he did not sing, he didn’t play, he didn’t write, he didn’t even listen. About a year after
the divorce, however, he was going
through his father's records when he
stumbled upon a stack of old Bob
Seger albums. “I was reminded that I knew every word to every song,” he
says. “Bob wrote about the human condition, common experiences everyone
faces and appeals to people from all walks of life for the long haul.” He
wrote off this epiphany moment as a fluke, but he kept listening to the music
of his childhood— Seger, Willie Nelson, Johnny Cash, and Waylon
Jennings— opening the door wide enough for music to come back to him.
If vinyl was the gateway drug, going back to the radio was the hard
stuff. For the first time in two years, McKinney began listening to contemporary
music, and discovered that while he was settling things in his own life,
contemporary country radio had become something for which he had an
ear. Though he had heard and appreciated artists like Keith Urban and Pat
Green before, he had not yet realized the impact
it would have on his own writing. Soon after, a friend of his, Scott Faircloth (songwriter
and producer for Lifehouse), convinced him to sit down and write.
“Scott asked me if I had written about the divorce and I told him, 'I haven't written
about anything.’ Scott challenged me to just write whatever would come out and not think
about selling records or radio, or demographics, just frigging write from the heart, from the
pain, from the soul. So I just simply poured out my heart with him at the piano and me frantically
writing and singing. Literally five minutes later the song was done and we were both in
tears,” McKinney recalls.
That experience still wasn't enough for him to fully commit to music again, but after several
music industry people heard the song and had the same stunned tears reaction— he decided
to stop fighting who he was and dive back in. “I just came to the realization that it is in me, for
better or worse like a marriage, music— performing and being creative is just who I am.” It was
then that McKinney began to methodically, cathartically, and honestly tell his story in song.
Though he had been writing for years and had a reputation as an articulate and clever lyricist
as well as being a master of the hook melody, his writing had always been missing his story, his heart, and now it was
there. For the first time, McKinney was bleeding on the page.
By facing his losses and demons on the page, McKinney is able to write relatable music. His passion and energy
is a perfect foil for his down-to-earth songs: it is hard to imagine anyone listening to “June 7th,” about his divorce,
without getting a lump in their throat. The song starts, “It was the 7th of the sixth month when my world stopped spinning/When you said that you don’t love me anymore/ We swore that we would hold on, so I didn’t see it coming/ And I
guess I really still don’t understand,” and his hurt is palpable. By being so specific with his lyrics, McKinney opens his heart up to the audience while still writing a song everyone who has ever loved and lost can identify with. Likewise, more laid-back songs like “Middle of Nowhere” are about growing up in the Midwest, and would fit in on any contemporary radio station—“Born on the Westside of a Midwest town/ Indiana boy without a doubt/ Raised on
the banks of the Ohio/ skippin' rocks to see how far they’d go” evokes more than just his own memories, these are the shared childhoods of Midwesterners.
He also talks about touring and the blessing and curse that music can be in “Strangers, Stages, and Cheap Hotels,” with lyrics “ I fell for the one mistress who don’t share/ she gives me strangers, stages and cheap hotels” and writes about new beginnings on songs like “Better the Second Time,” with lyrics like, “Every now and then you get a second chance/ Someone comes along that makes you want to live again,” which make it obvious that McKinney is taking the pain of the path of all he’s learned in his life and moving forward. He is ready to leave his permanent mark on the music industry.