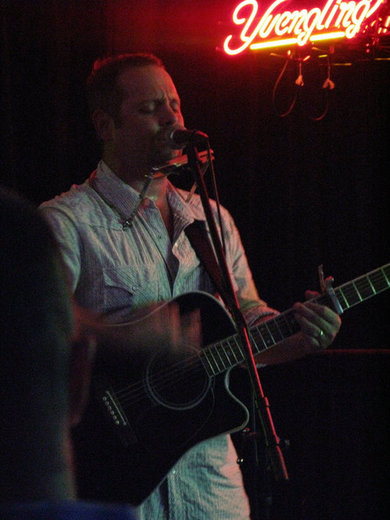 There’s never been a time when music wasn’t a large part of Joe Ferreri’s life. And he has no intention of it ever be any different. The singer/songwriter is going strong putting out new music and soon plans to gear up to perform on the local stages.

Ferreri, who resides in Hasbrouck Heights with his wife and their two children, has been playing and recording music for years. He says there really isn’t a day that goes by where he is not practicing or writing new tunes.

He picked up a guitar for the first time when he was 11-years-old and he’s never put it down. Artists like Bob Dylan and Bon Jovi continue to be major influences on him musically and some of that shows through his own sound.

A few years back he released “September” a six-song album. Now he is very proud and excited about two of his newest songs, “Let Freedom Ring” and “West,” which he just released as a single.

Ferreri says he always wanted to write a song in honor of our Troops fighting and dying for our freedom. He’s done so with “Let Freedom Ring” which he has dedicated to the troops and the veterans of war. He hopes the song will catch on and become like an anthem.

He recorded these two recent songs at Dreamland Recording Studio, near the legendary music and cultural area – Woodstock. He worked with Jerry Marotta, who operates the studio, and has played with Peter Gabriel and other star recording artists.

He also credits his friend Dan Weiss who has contributed a lot to his recent recordings. Ferreri, who works as a stagehand on Broadway, met Weiss back when he was playing guitar in the show “Rent.” Weiss has helped bring in some studio musicians who performed on Ferreri’s recordings. Weiss also contributed some guitar and keyboard playing.

He’s worked with other musicians in the past, being parts of bands. He notes his old band Sweet Life which he had a lot of fun with playing a lot of the area clubs back in the late 1990s.

“Besides my wife and kids, music is everything to me,” says the singer/songwriter. “I have a great job and a great supportive family.” Music even led him to his wife. The couple met years ago when he was in his former band, he says.

Ferreri loves to write music and in fact says he does most of his songwriting in the kitchen. He jokes that he isn’t really sure why it is that way but it’s just something he does. It is the brightest room in the house afterall, he says.

Ferreri mainly performs as a solo artist but hopes to one day soon get a full band going again. Over the years he’s picked up the harmonica which, as a solo artist,  works well with the guitar and gives his music a fuller sound, he says.