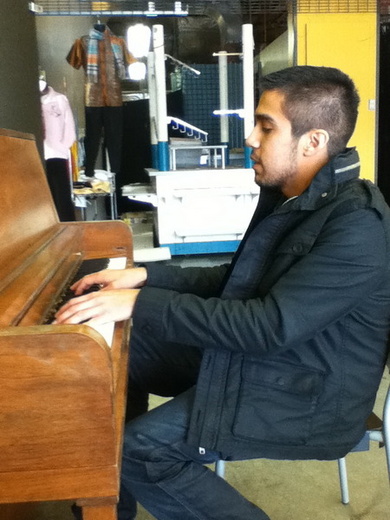 I was born on November 14, 1989 in Harlingen, TX. When I was younger my dad, Martin De Leon, tried to teach a more spoiled and jaded version of me to play the guitar but, regrettably, I stubbornly refused. then some years later around the age of 14 (around 2003) I attempted to learn the guitar by attending classes, given by a pastor's wife, at a spanish church back in TX. The outcome...I failed. I gave up on learning the guitar because it seemed too complicated and too time consuming. Thankfully, though, it didn't end there. Around the same year, my dad pulled a guitar he had previously owned, yet pawned for cash, out of the pawn shop and presented it to his boy. That is when I started to really build an appreciation not only for the guitar but for all instruments. My dad, who had been a guitar player for over 20 years, would eventually give me little tips that made me take leaps in my learning the guitar.
During the month of February 2004, my family, still residing in Texas, decided to take a leap of faith and move back to Minnesota. Once there, we lived with my grandmother (mom's mom) at her place in Savage, MN and stayed for about 1 month until my parents found jobs and a place to live. While at my grandma's house I locked myself into my uncle Joe's room and listened to Van Halen over and over again trying to imitate the sounds I was hearing (note: I was new in school with few friends so LITERALLY all I did was play guitar. My grandma later called my guitar my girlfriend). I didn't have an amplifier at the time so I played my electric acoustically. But luckily my uncle joe had a bass amp so I would plug my guitar in when he was off at work (one time I even thought I messed it up. how horrifying!).
As the month of March rolled in, my parent's found a townhome in Shakopee, MN. The townhome consisted of 6 people jammed into 3 rooms but it was better than my grandmother's place which when my family moved in hit its peak of 13 people! There I continued to practice and practice even disregarding my schoolwork. My newfound obsession led my father to later comment, "I created a monster." He was right I couldn't stop myself. All that I wanted to do was feed my fingers and my ears. Every note was beautiful; I was hungry for more. I invested so many hours and I improved very rapidly. Instead of practicing for an hour each day, I practiced over four times that amount! What most were learning in a year I was learning in 3 months without official lessons!
One day, while we were still living in the townhome, I came home from school. As I walked up the stairs it seemed like any other day. I was going to forget about my homework and practice when suddenly I saw my dad in his room playing my guitar but it sounded different. I walked in and he was playing my kramer guitar but with a new (actually it was used; bought at a pawnshop nearby but it was awesome to me) amp! I was so happy. Words couldn't describe how I felt. That Roland cube 30 was my first amplifier ever! That was another catalyst in my learning process. Now I wanted to practice for longer periods of time and I did. My obsession grew. I played on and on in the room that I shared with my brother (I don't know how he coped with the constant practice?). Another thing that led to me practice harder was a comment from my brother who, while I was trying to learn a Van Halen tune, shrugged me off saying I wouldn't be able to learn it...I did. Pretty soon the lease on the townhome ended. My family then moved on to another home. There I continued to practice and practice slowly developing a confidence in myself as a musician. One of my most memorable moments while living in that house (no longer a townhome) was my 16th birthday (11/14/05). I received a good amount of money from my generous family. With that money and my musical hunger I went to Guitar Center and bought myself a delay pedal and a Wah pedal! Both were new to me and they greatly increased the quality of my live sound. At the time I was the lead guitarist in a spanish church. I continued in that volunteer role for about four years finally leaving in June 2009. The skill that I acquired was tremendous; not only did I learn how to better myself as a musician, I also learned how to work with others as a team. Furthermore, playing every sunday helped me attain confidence on stage and thus reduce my fears. From my first guitar to my first amp to playing live for four years looking back I realize that in a short amount of time I managed to improve a great deal and learn a whole lot; but still I know that I have a whole lot more to learn.