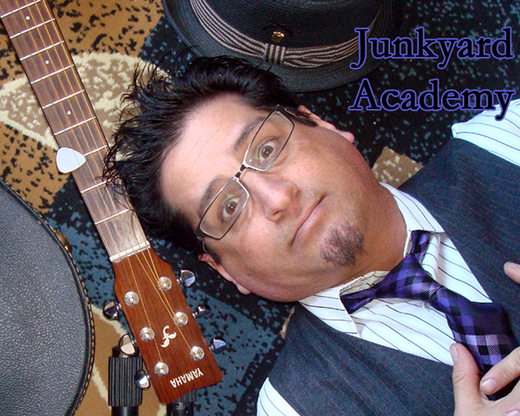 Lewis Nowosad - Guitar/Lead Vocals
===========================
...played guitar for six years around the time when he was in high school. He wasn’t in high school itself, for six years, but for him, (like many geeks of his time), it felt much longer. One day, while stringing his twelve string in his lap, the string-less guitar surrendered it’s neck under it’s own weight with one simple cracking sound. It was a cheap guitar. He had to wait another twenty years to get another guitar, but once he was given one by his wife, he made up for lost time. He is a prolific songwriter who makes observations about life and lost love as well as songs which tell whimsical and touching stories. Chopping away at the strings, his powerful vocal delivery would stop a catfight. (Felines would also stop fighting). For the past six years, Lewis performed in front of a digital camera, posting these home videos to the Internet, as it was the only way he could keep up with his prolific writing pace. Despite the fact that he has a wonderful marriage, he writes a pretty mean break up song. He also writes songs because sometimes, he feels like rhyming an interesting word, ‘Fibonacci’, for instance. If he does not continue to create songs and lyrics, he feels he will implode, taking the known universe with him.
.
Rob Neidel - Bass/Vocals
===================
...played bass for a band called Local Anesthesia back in high school. Rob admits that because of his height, the bass he played appeared huge, but he made up for it in enthusiasm. With his 20 feet of patch cord, during gigs, he would venture into the audience with the fervor of a red-headed step child amped-up on sugar, caffeine, Red Bull, Pop Rocks and a stern dosing of Jack Daniels. Rob Does not partake of sugar, caffeine, Red Bull, Pop Rocks and doses of Jack Daniels…simultaneously…but he does have red hair. A racing enthusiast, Rob spent many of the 20+ years behind the wheel of one Porsche or another and thus, had roughly the same amount of time removed from his musical instrument as his best friend, Lewis, only more so by five years. Lewis, tired of being a solo act, drafted Rob into the band, by playing the ‘Lifetime Friendship Card’ stating flatly, “I’m drafting you into the band, you have no choice, practices begin once you find a bass”. This happened one and a half months before a house concert where Rob had to play more than fifteen songs. In that short amount of time, Rob amazed even himself.
.
Bractune - Drums
=============
…is the full-time drummer for Sacramento band, The Kimberly Trip as well as The Bitter Elegance and is a self-confessed high-school nerd with sci-fi obsessions. Nowosad and Neidel look on him with amazement as he sets up the iconic ‘junkyard’ drum set, consisting of; one navy foot locker, one fully operational 1925 Keystone Projector, (complete with empty reels which he uses as symbols), a 1940’s era all-leather suitcase with leather straps, one Underwood Typewriter, (with all it’s keys!), and two custom designed and reinforced shoeboxes made to sound like both a snare and a tom drum. Audience members are warned to keep clear, as they may experience what it’s like to become a percussion instrument if they get too close. Bractune has graciously offered to fill in for the Junkyard Academy when they have a gig, (so long as it does not interfere with any of his obligations to his other bands), and when he plays the menagerie of the ‘junkyard drum kit’ he finds the groove, the pocket, and the beat, al the while keeping a straight face. He makes both Rob and Lewis wish there were two Bractunes.
.
Kevin Karr – Lead Guitarist
====================
.
Kevin joins us as of 6 hours prior to this posting, (which was typed-up at Midnight on March 7th, 2012). We're expecting his blurb to be nothing short of amazing to read with content the likes of which you could compare to the Seven Wonders of the World. His expert ability on guitar will entrance you and cause you to throw bras and panties and…and…adult diapers (?) on the stage as he plays. As well, bolts of electricity and streams of liquid fire could possibly issue forth from his guitar as he effortlessly plays mind boggling riffs ALL WHILE TAP DANCING...or...maybe he'll submit something a little less than all that, but why not brag a little, right? The man knows what he's doing and even has his own custom Clayton guitar picks. (Anyone who has custom Clayton guitar picks is all right by me). Ah! he just sent his blurb over; Kevin was born and raised in Vallejo, CA. He has been playing guitar for roughly 25 years and can play most styles of music with interests in rock, metal, country and any good song that has meaning and substance. At an early age his dad would listen to a lot of country; (Kris Kristofferson, Willie Nelson, and the like). Kevin is currently writing and recording a new all-original CD that will be finished in mid 2012. He’s so awesome that HE will be playing all the instruments and singing all the vocals. Epic…simply epic. Check his stuff out here; http://www.reverbnation.com/kevinkarr Kevin’s choice of instruments and gear are; Gibson flying V’s, Schecter guitars, DR strings, Dunlop & MXR pedals and the aforementioned custom Clayton guitar picks.
.
Junkyard Academy’s recent ‘release’ is 12 songs long, comprised of ‘found tracks’. Over the past couple years, they had been fortunate to have people offer time in their hobby-studios as well as the occasional block of time at a million-dollar studio at a digital arts college…all free of charge. They want thousands of screaming fans (the 'good' kind, not the 'screaming it terror' kind)
.
Find them at SoundCloud, ReverbNation, CD Baby, or their own site at JunkyardAcademy dot com
.
‘Enroll Now’ by clicking the shiny blue ‘Become a Fan’ button on;
.
www.ReverbNation.com/JunkyardAcademy
.
…And receive more inane ramblings from members of the band.
.
Sing, Dance, Live.
Junkyard Academy!