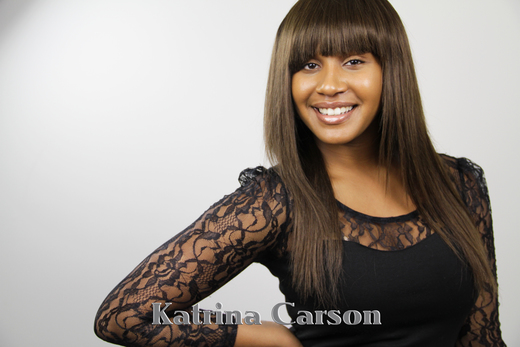 Katrina is a singer, songwriter, dancer, actress radio and television hostess. This causes many to wonder if there is anything this young lady can’t do.

Katrina Carson began her career at the age of three. It was then, when she took the stage that she knew she wanted to perform. Though singing is her passion she has also proven how talented she is in the Full Moon Production of “Rag Doll” and in the hit “Smiling Fish and Goat on Fire.” The latter helped launch the acting and directing careers of the Martini brothers, Derek and Steven.

Katrina has opened for celebrated artists such as, Al Hudson & One Way, The Contours, The Chilites, Midnight Starr and The O’Jays. She has also had the pleasure of performing on stage with The Whispers and Howard Hewitt.

Katrina has trained with some of the best choreographers. She has worked with Dante’ Harper, Wade Robson, Swoop, Storm, Shane Sparks, Aaron, JT. Horenstein and Michael Franks and many more.

Katrina’s natural ability shows as you watch her local television show “Kids On The Move” on Comcast and ED TV16, both on Southfield, Michigan cable stations. The show is produced by Katrina and her manager KC.

Musically, Bad Boy Entertainment acknowledged her amazing vocals and included her on the single “Wanna Move” by P. Diddy with Ciara, from the hit album “Press Play”. She currently has several videos on YouTube, but the video for her song “Beautiful” is the best thus far.

In the studio, Katrina has recorded her own songs with a variety of platinum producers. Which names you can see on the CD.

Katrina’s beauty, charm, and intelligence radiates from within, giving her maturity beyond her years and a personality that is loved by all she meets. Spunk, charisma, and drive are the characteristics that make her the stupendous up and coming artist who is destined to be the greatest entertainer of all time.