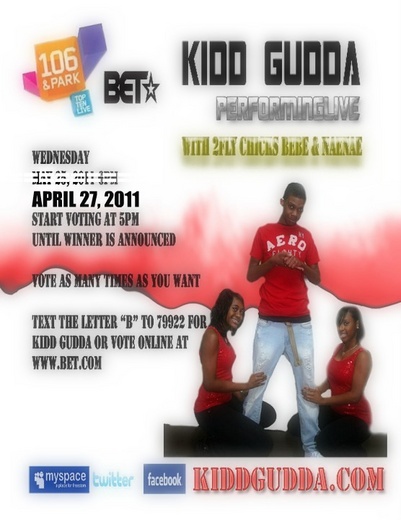 BIOGRAPHY
DeNard Monquill Baker (Kidd Gudda) was born March 12,1994. He is 16 years old and in the 11th Grade, He attends
Central High School. Raised in Pageland, SC he resides with his
Parents, Melanie, James and younger brother James Jr. His
younger brother is 10 years old and his artist name is Yung Jr.
Whenever they perform together they have a great time on stage.
Kidd Gudda love being on stage and entertaining.
Whenever he performs he is the life of the party. At the age of 7
he wrote his first rap and he continues to write and arrange all his
lyrics.
In his writing his goal is to reach everyone that hears it, both
young and old.
He has performed at Local parties in both North & South
Carolina, On May 15, 2010 he host a show Kiddz Night Out
featuring the Crazy Kiddz. It was a success, you can view the
performances on YouTube, Other performances include Club
Fetish (Chesterfield ,SC) Wine Up ( Charlotte Nc) Get Money
Entertainment( Charlotte NC) Apostrophe Lounge (Charlotte,
NC) Club Reign ( Charlotte, NC) Club Crystals (Charlotte NC)
The Block Party Car & Bike Show ( Cheraw SC) where Pastor
Troy, Yung LA and Lil Ru also performed. His accomplishments
include, Winning 2010 Best Entertainer (Music & Art Heritage
Festival) The Back to School Bash Showcase Host by B Daht
102 Jamz, (Judges were Columbia Records, Levert Multimedia
Group, Tmac Management) he was accepted in the Alpha Music
& Art Program, which he attended 4 years, he attended John
Casablanca’s Acting and Modeling Center in Charlotte, NC and
he audition for Levert Entertainment in Atlanta GA. In July 2010
he did a Showcase for Lenny S A&R w/ Def Jam he also
received Lenny S Contact Info. This was a wonderful experience
for him. On May 25, 2011 Kidd Gudda will be performing live
on BET 106 & Park Wild Out Wednesday (W.O.W) and he is
very excited about this accomplishment. At the Age of 16 he
currently have 5 Mix Tapes Entitled: Swaggas On Deck, Kiddz
Night Out, Crazy Kiddz, Kidd Story 4, & July14. He also has
2 New Singles My Chain & I’m Ma Cool Dude. He is working
on 2 New Singles along with rhymes. He considers himself not
only a Hit maker, but a rapper & entertainer as well. He has
performances on Youtube, Facebook, Twitter, Myspace.
Doing what he do Best...... Entertaining
His source of inspiration is God, his Grandmother, and Parents.
He said his mother always told him," If you going to Dream,
Dream Big”
“His Motto is You Don’t Lose…….. Until You Quit!”