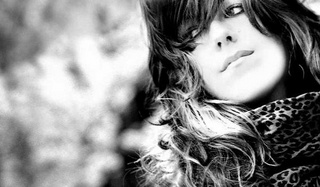 Inspired by the cities of Paris, San Francisco, New York and Galway, the writing of Anais Nin and the artwork of Gustave Moreau, Kim's music digs deep and then nestles close to the heart, whispering moments of truth, battling with love and lust and offering an intimacy as compelling as it is provocative.

'You Are Loved' was recorded at Monkeyboy Studios in Brooklyn,NY with producer Brad Albetta (Martha Wainwright, Teddy Thompson,) and engineer Brian Fulk (Martha & Rufus Wainwright). Featured on the record is Alex Nahas on the chapman stick and Harry Green as well as Matt Johnson (Rufus Wainwright, Jeff Buckley, Beth Orton) on drums. Currently being played on 180+ college and independent radio stations across the country, You Are Loved offers ethereal highs and earthy, melancholic lows - an effortless blend of indie rock and freak folk.

Kim currently lives in New York City and has a not-so-secret love of country music, Muse, Bon Iver, Editors and Oldschool Jungle. 'You Are Loved' is out now and available on iTunes, Amazon, cdBaby and via www.kimgarrison.com.

"...a fresh and fierce songstress with a penchant for driving rock lullabies and gritty, gut-punching melodic hooks that hang in the air and do flips." - city of dis

“Kim Garrison's music waves between indie rock and willowy folk, between shadow and light, between ether and abyss. Half-angel, half-demon, a kind of spiritual daughter of Jeff Buckley and PJ Harvey." Election Song