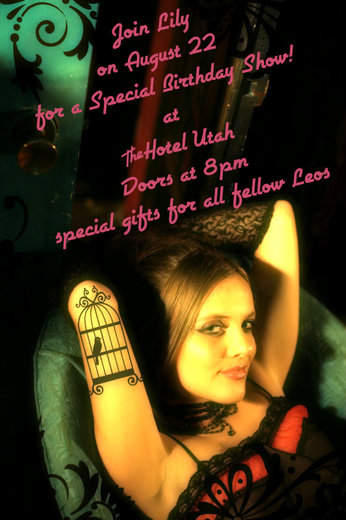 For years fans of Boston born singer/songwriter Lily Holbrook all had one thing in common...a subway token! Lily was a regular fixture inside the Park Street Subway Station, performing to mesmerized crowds of commuters. Her busking eventually garnered the attention of media ranging from The Boston Globe to The Washington Post--and more. During production of her latest album, legendary producer Glen Ballard (Alanis Morisette, No Doubt, Michael Jackson) even touted Lily as "the real deal!"

Lily first unleashed her voice on a wider audience with her independent debut "Running from the Sky" in 2000. Described by fans as "a somber fairy tale" the ethereal vocals and dark lyrics quickly earned a cult following resulting in the street singer selling over 20,000 copies as an unsigned artist. Her music has caused pedestrian traffic jams in Boston's Harvard Square and Newbury Street, Santa Monica's famed Third Street Promenade and, more recently, in San Francisco's Castro area.

Given her steady street buzz she was a natural choice for the film, "Playing for Change"-a rockumentary highlighting the lives of 16 street musicians across the country. The film struck a chord with audiences and was added into rotation on the Sundance Channel, the Independent Film Channel and Comcast On Demand. It also secured Lily her first record deal and, in 2005, BackPorch/Virgin released her second album "Everything Was Beautiful and Hurt."

With the release of her most recent album, "Wicked Ways," an opening performance for Brian Wilson at Hammerstein Ballroom in NYC and a slot at New Jersey's "All Points West" festival headlined by Radiohead, Lily is no longer an underground sensation. She is currently in San Francisco working on her fourth album. Describing her music as melancholic rock, Lily's influences have always been diverse, ranging from Led Zeppelin and Pink Floyd to Sarah Mclachlan, PJ Harvey and The Cure.

Ever indecisive and unwilling to miss out on either cities' unique charms, Lily considers herself a bi-coastal citizen of both Boston and San Francisco. She continues to busk from time to time and delight fans, locals and tourists with her impromptu concerts.

In addition to her music, Lily is passionate about many issues including LGBT rights and women's issues, with a special place in her heart reserved for the welfare of animals--particularly her two rescued cats. She hopes to continue donating her musical talents to help further these causes.