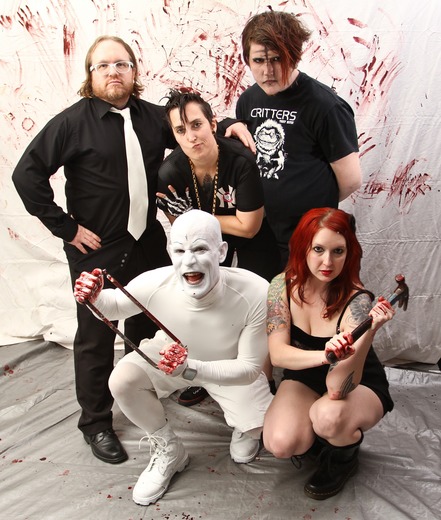 Music Style: Lucid Dementia is a horror based hybrid mix of Metal, Electronic and Industrial music fronted by a female/male vocals combo. Influences: Interesting sounds, powerful guitar riffs, hooks so deep you bleed, drums that really thump, the vocal insanity of a children's puppet show, bass lines that dance and the wonderful horror of living. Explanation: "Lucid Dementia" is named after a six foot tall alien-like creature puppet that fronts the band, and who has been leading it in a full frontal assault on audiences since 1996. The legendary Lucid Dementia performance is a cross between a b-movie slasher flick, a David Lynch film, and a children's puppet show gone horribly wrong.* You have to see it to believe it. *” Lucid Dementia was fascinating; rarely have I found a band so involved with their personal mythology. The set started with a singing, six foot tall, alien puppet, and the bizarrity only continued from there.” -Jerusha Burnett Redushab LiveJournal "I don't know quite what I was expecting, but quite frankly, I was blown away!!! This band is great! They're goth, punk and tight as hell. I couldn't stop pounding my feet and bobbing my head. I defy you not to get off!" -John Aielli, KUT radio 90.5FM OCT 2007 Lucid Dementia is currently playing live in support of their newest release, "Trickery". Exposure: Television: The Songs "Twisted" and "Cannibal" have been used on the CBS Nationally Broadcast television show: "NCIS“. Lucid Dementia recently headlined The Halloween from Hell at The Engine Room in Houston, as well as headlined the international benefit: The Sluggo! Ball in Austin Texas. Lucid Dementia is being played by underground djs all over the world. Lucid Dementia has performed in Austin, Pflugerville, Buda, Houston, Dallas, San Antonio, San Marcos, Manitou Springs, and Colorado Springs, opening for nationally touring bands such as "Switchblade Symphony", "Clan Of Xymox", "Kevorkian Death Cycle", and "Crux Shadows". A national US tour is planned to support the next album release. Lucid Dementia has been reviewed by The Austin Chronicle, The Austin American Statesman,Outburn Magazine, Industrial Nation (Magazine), Interface Magazine and Newgrave Magazine. Lucid Dementia also appeared on the Austin public access TV show: "Rawtime", as well as a live recording at Austins NPR station KUT 90.5FM. Band Members: Sheldon (Puppet Master, Programmer, Vocalist) Holly (Femme Vocals) , AzilX (Drums), STE7EN (Guitar Conspirator) & Nik (Bass Manipulator)