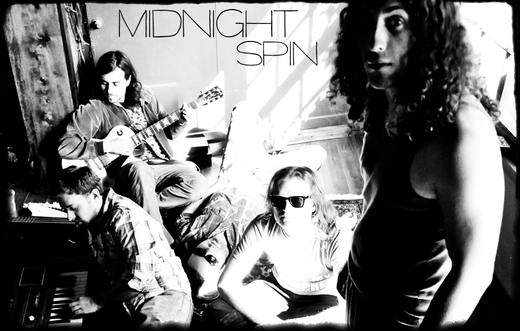 Brooklyn rock band Midnight Spin was voted winners of the 2010 Independent Music Award for Best Indie/Alt./Hard Rock Song "Trigger Finger Itch". The band is currently working on their debut full-length album in NYC that will showcase both their songwriting range and overall ambition. Justin Gerrish (Vampire Weekend, The Strokes, Weezer) has signed on to produce/mix the project.

The quintet was also voted NYC’s Best Emerging Artist of 2009 by the Deli Magazine’s readers, and at the 2010 CMJ Music Marathon, the Examiner.com declared them one of their “Top 10 CMJ Picks.” And it’s easy to see why - knifing guitars, driving basslines and powerhouse drumming give Midnight Spin an aggressive indie rock bent, while intricate keyboards and strong harmonies provide a familiar melodic dynamic. It doesn't hurt that drummer Danny Scull and singer Mike Corbett have been playing together since they were thirteen.

After moving into a cramped music studio under the JMZ train during the winter of 2007, the two friends and musical mates set out to pave the streets of Brooklyn with their brand of loud, exuberant rock. Ben Waters, a multi-instrumentalist and college roommate of Danny's, was recruited to play bass, while the band received a gift from Craigslist when experienced guitarist and vocalist Jim Terranova responded to a post. Keyboardist Jeremy Cohen completed the lineup when he first took the stage with the band in July 2009 at the release of their debut EP, the critically-acclaimed Through the Mojo Wire.