Hailing from Spokane, Washington, Mon Chéri have their hearts set on making every show a memorable and fun experience. Since its inception as a 2-piece in 2008, Mon Chéri has blossomed into a full four-piece retro-indie-pop band that loves to have fun. Since Patrick McHenry (guitar/vocals) and Caroline Francis (vocals) added Kurt Olson (upright bass) and Brandon Vasquez (drums) to the lineup, the result can only be described as chemistry at its finest. Watching them perform, one can see their inherent joy and love for the music they play, as well as the friendship and close relationships they have built with each other… it’s infectious, really.

Through all the goofiness, dance parties, crazy shows and having a good time, hard work and dedication definitely aren't lost on these experienced up-and-comers from the Inland Northwest. In the course of just over two years, the band has recorded two LP’s and an EP, they’ve played countless shows, toured the West Coast, and they’ve won various accolades from local and international media. In 2009, Mon Chéri was named one of the Inlander's "Bands to Watch." Local music blog thesomshow.com puts on a local music awards show, which saw the band winning various "Sommy" awards including Best Live Show, Best Album, and Band of the Year in both 2009 and 2010. In November of 2010, the band was featured on MTV Music’s blog as the “Needle in the Haystack” band of the week, highlighting their successful music career. Mon Chéri doesn’t intend on stopping there, either. 2011 is going to bring them a new 12 song LP, a two week tour in the US, numerous shows in the Inland NW, and the opportunity to really catapult themselves into the Indie music scene.

Mon Chéri plays a unique brand of indie-retro-pop-rock (seriously), with plenty of nods to the oldies that has tinges of jazz and folk. As evidenced by their dreamy harmonies, they draw influences from artists such as The Beatles, Everly Brothers, Rufus Wainwright, Sondre Lerche, Ryan Adams, Jeff Buckley and Simon & Garfunkel. After the successful debut of their full-length "Colors of Love," and their EP "Mélange" (both recorded by Jae Hamm of Iconoclast studios in Spokane, WA), the band decided it was time to move on and push their sound further. This past winter they recorded a new full length album with Grammy winning engineer and good friend, Kory Kruckenburg. It’s slated to be released in June, 2011 and they anticipate this to be their best work yet.

Constantly writing songs, Mon Chéri has well over 40 originals to choose from, but they are also known to throw in plenty of covers by the Beatles, Everly Brothers, and Death Cab for Cutie (to name a few). With their sophisticated, energetic sound and wide variety of material, Mon Chéri is extremely versatile. The band has played gigs in all sorts of settings including bars, coffee shops, weddings, charity balls, old folk’s homes, wineries, and private events, but they’ve also opened for national acts such as Jeremy Enigk, Eric Hutchinson, Secondhand Serenade, and Jonah Smith. No matter the stage (or lack thereof!), the audience (young or old!), or the circumstances (rain or shine!), the band just loves playing and sharing their music with people.

Mon Chéri’s charismatic stage presence is a must-see, their songs are infectious, fun and heartfelt, and all they hope to do is bring their intoxicating charm to a venue near you, even if that venue is in your basement! 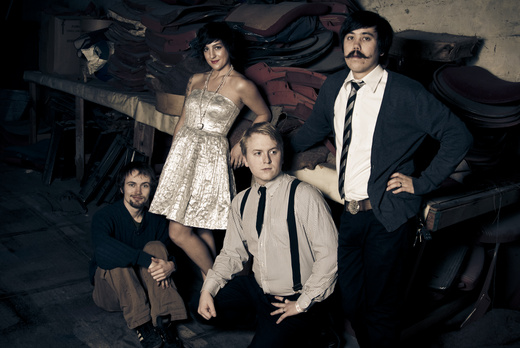