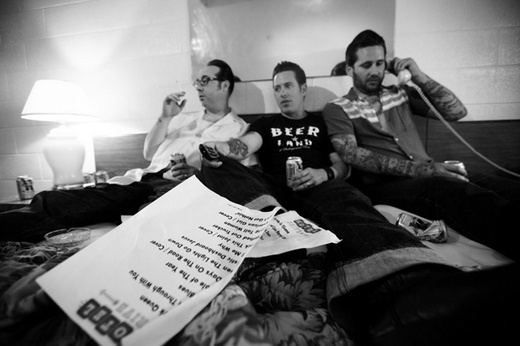 Motel Drive came to life in 2008 and shot up screaming like a crazed Chevy Bel Air on a hot July night in California’s Central Valley. The ever persevering search by long-standing valley rocker JD Goodwin (Cacti Widders, Cole Fonseca, MoFo Party Band) for the right musicians to take his songs to the level where they could lift your soul or break your heart finally paid off in early 2009 as he turned his search back toward home and toward longtime friends and fellow musicians. The three-piece lineup that is now Motel Drive is comprised of exactly that, longtime friends and former band mates, and has solidified into a diligently focused powerhouse. Jake Finney (MoFo Party Band, Arsen Roulette, many others) steadily slaps his upright bass and Christopher “Rhinestone” Estep (The Suppressors, Darrin Stout, many others) keeps solid time on the drums. Together you have the foundation upon which Motel Drive has risen to the top of the Central Valley scene
In early 2009, the band recorded a six-song EP, $5 Tricks. Truly, as the label warns, the music does lift your soul and break your heart, fulfilling JD’s final search for the right band. Fan favorites “Drifter Blues” and “Plastic Dashboard Jesus” have both been featured on the podcast show Radio Free Bakersfield produced out of Seal Beach in southern California, and Straight Razor Records features “Plastic Dashboard Jesus” on their compilation Rebels of Rock ’N Roll Volume II, playing alongside The Chop Tops, The Devil Makes Three, and others. In 2010, the band completed a self-titled full-length album that has already received critical praise from bloggers and podcasters across the country, even making several "Best of 2010" lists! Both albums are available to purchase online through iTunes, Amazon, and CDBaby. In addition, you can find Motel Drive streaming on Pandora, MOG, and Jango
Proving themselves as a sight to see time and time again, including winning the 2010 Fresno State Battle of the Bands, the local media has caught wind of the growing zephyr that is Motel Drive. Fresno Bee writer Mike Osegueda featured the band twice as “Artists You Should Know” in 7, the weekly entertainment magazine, raved over their performance at the re:FUSE Festival both online and in print, and recently named Motel Drive as a local band deserving greater attention. College radio station KFSR (CSU Fresno) and Monterey Bay Area radio station KPIG have both hosted the band for live in-studio sets streamed across the globe through the Web and have added $5 Tricks and Motel Drive to their playlists. The band also made two live appearances on the KMPH-Fox local morning news show, Great Day. Recent accomplishments include winning an opening slot for HANSON's Shout It Out! tour in San Francisco and winning the Southern Rock category and the Pro Performance Video category at OurStage.com. The threesome has taken their electricity-filled live show to venues up and down the long state of California. Premium home venues The Cellar Door in Visalia and Audie’s Olympic Tavern in Fresno regularly host the band allowing them to play for their core following and best friends. And, this last March, the boys toured their way to Austin and back for the SXSW music festival
Make no mistake about Motel Drive. They have caught the attention of promoters statewide and beyond. Motel Drive is truly your new favorite band!