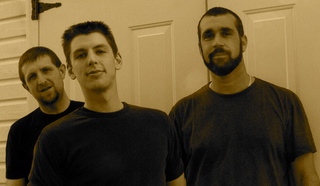 With his guitar strapped over his shoulder and years worth of music written on napkins stuffed in his backpack, M.T. Rose set out from New York last Fall to team up with three seasoned rock musicians in Richmond VA to form a new rock band that is destined for the big stage. The band, M.T. Rose LIVE, has produced their first CD and are scheduling a summer release of exciting new rock music that has received rave reviews from local venues

Rehearsing and producing their music in one of the Richmond area's top recording studios located right on their property, the band members, Mark Rosellen (songwriter, lead guitar, vocals), Daryl Sklar (drums, compositions), Jake Joseph (songwriter, bass guitar), and Ramone (keyboards) cranked out the music that comprises their first CD with eleven dynamic songs. Final touches to each tune are in the works as the band continues to create a unique, quality sound that has caught the attention of rock and rollers throughout central Virginia

The members of M.T. Rose LIVE have been through many experiences in the Industry. From extensive touring, shows overseas, opening for national acts such as Teddy Geiger and Billy Joel's daughter and performances at Universities, have helped M.T. Rose and the other members make creating catchy, upbeat rock music and entertaining audience interaction a profession

As 2008 began, M.T. Rose LIVE released their first demo CD as a band entitled "What We'd Be Like," which features the first three songs the members worked on and recorded. The band is currently booking more gigs to fill up their spring/summer calendar and performing their new original songs and a few covers while entertaining the fans with lighthearted antics. While the band rocks the area, they will be preparing the first album recorded as a band. 11 songs are expected for the debut M.T. Rose LIVE album, due out mid-summer 2008

There is more to come as M.T. Rose LIVE continues to write and produce new music that will be performed in concerts scheduled for this year. Watch for them and catch their shows. You’ll get hooked on their performance.