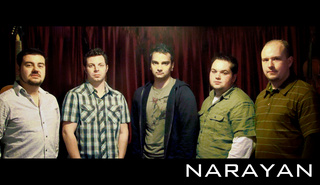 The Narayan Invasion
It's not quite rock. It's not quite electronica. But it sure tastes good. Through years of research and development, the group has successfully made a musical zygote from an electronica egg and an alternative rock sperm cell. Proving that it is possible to write "very, very catchy electronic rock" abound with lyrical depth.

Public response to the debut album, A King Declares Strength, has been overwhelmingly positive, invading both terrestrial and internet stations alike. The band had been featured in GRock Rising, and WDHA's Home-Grown Spotlight. The album debuted at 16 on 7digital's Indiestore charts and is available on iTunes. Hear what Stuart A. Hamilton, senior editor of Zeitgeist, calls "cracking tunes on offer, with nary a duff one in sight."

After months of composing in front of an apparatus of cathodes, diodes, and guitar picks, Narayan is hard at work on the proverbial road; a full east-coast tour is also in the works along with a tentative slot on the Vans Warped Tour. The tight-knit lineup, which prides itself on its extremely energetic live performances, includes Thom Becker on drums, Bahadir Erdem and Russell Helfman on guitars, and Vyom Pandit on vocals and synths.

Narayan recorded and mixed A King Declares Strength at Semitone Studios NJ. Mastered by Emily Lazar at The Lodge NYC (The Prodigy, Depeche Mode, Garbage), the debut album is already generating a buzz throughout the independent circuit. But you won't find a brainchild anywhere.

For more information on Narayan visit: http:/Narayan.us
For Booking: narayan.audio@gmail.com