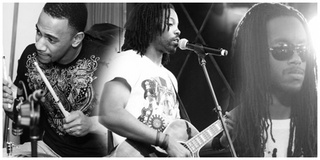 Ndelible is an Alternative/soul/hip hop band best known for their high energy shows and unique sound. The band was formed in 2006 when the front man (David James) connected with guitar player (Myron "Q dot" Mullon) and drummer (Ron B.) They draw from all types of musical influences, a fan once referred to the band as a cross between the foo fighters and the fugees. There debut album "Time and Chance" is now available on itunes and most other online stores. Cdbaby says: "this album has a little bit of something for everyone. The end result may remind listeners of Prince, Outkast, and even Dave Matthews Band at times. These guys know what they're doing and I can't wait to hear what they do next."

Ndelible, the group’s name which means permanent and enduring was given to the group by David’s father as encouragement that the band would be everlasting. Since 2006 the group has proved to truly be indelible, performing shows throughout the country and booking gigs alongside artists like Common, Eric Roberson, Dwele, and Fertile Ground.