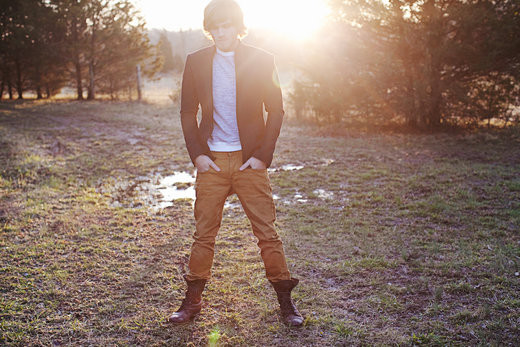 Singer-songwriter Nick Gill released 3 albums and embarked on a 50-date tour before he finished high school. Upon graduation, the Alabama native decided to give Music City a go. “When I moved to Nashville, I felt bombarded by the music industry, another person with the same music career goal. I was at the end of my rope,” Gill confides. He decided to give up. At that very moment, he wrote the song “Row.” The tune’s uplifting message changed his life. Two days later, producer Ed Cash (Vince Gill, Matt Wertz, Amy Grant, Steven Curtis Chapman) contacted him. The duo collaborated on Waves Are Only Water, a stunning EP of Gill’s most poignant compositions couched in an elegantly spare and warmly organic production treatment.

The lyric in “Row,” “Waves are only water,” became Gill’s inner compass as he navigated life, and the music industry, with spiritually-centered ease. “Anything you’re going through, it’s just waves in the ocean, little ripples you can get through,” he says.

Nick Gill’s earnest and emotive pop-folk has garnered favorable comparisons to Jack Johnson, John Mayer, Dave Barnes, The Fray, Matt Nathanson, and Mat Kearney. Back home in Alabama, the Mobile Register called his previous album “a whale of a calling card.” Where Y’at Magazine has said: “Gill shows much promise musically as his career has only just begun. There’s great raw emotion communicated through his tracks enabling Gill to sound more like a young Jack Johnson rather than a high school student playing guitar.” Life Is Awesome gushed:  “The sheer number of singer/songwriters trying to break into music can make it difficult for one to stand out without a clear differentiating factor. Enter Nick Gill.” Muzikreviews.com noted the: “The lyrical maturity of the album should also get the record some traction.” Legendary producer Ed Cash, who produced Waves Are Only Water, has said: “This is one of my favorite CDs I've worked on, it’s classic and timeless.”

“Wave Are Only Water is like a diary of the past 5 years, from high school to being out on my own,” Gill says. It’s a boldly candid look at love, life, loss, and growing up. “My main thing with lyrics is to always give hope. I like my songs to be positive and uplifting,” he reveals.

The stately and haunting “How It Feels”—with grand strings, tender guitar fingerpicking, and a crystalline piano melody—is a powerful tribute to a friend who took his own life, and within this mournful memoir, Gill finds light, a way to celebrate a life. With rich low tones reaching up to a honeyed falsetto he sings: I know that it hurts, definitely a tragedy, but remembering your life brings me back to the comedy, do you remember that night on Halloween when we drove through the town with all the beauty queens? “This was the first thing I played after I heard my best friend committed suicide,” Gill says. “It brought me closure.”

The goose-bump inducing love song “By The Way” has an airy ambience, with an atmospheric storm brewing beneath acoustic strums. It reaches its zenith with a soaring chorus. Here he sings with sweeping romantic sincerity: “By the way, you don't need a pot of gold to show me that your love is gold, by the way, By the way, you know that you need the love tonight to make it all alright by the way.” “I wrote that about a girl I liked in high school. She actually walked into class while I was writing the lyrics,” Gill reveals.

The EP concludes with the gorgeous sun-peaking-through-the-clouds poise of “Summer In The Winter Time.” Gill’s lyrics here are unflinchingly positive, he sweetly sings: I made a picnic for you/I made a picnic for two/ come morning we’ll watch the sky turn from black to blue/you are my summer in the winter time/ you are the light that melts my frostbite.

“I started working on my first record in 8th grade. I wrote a song about my English teacher, she was crazy,” Gill says laughing, reflecting on his journey.  Gill wrote and played all the instruments on this early effort which he recorded in his garage on an eight-track. By the time he was in high school, he did a 50-date Southern tour. “I would play until 3 in the morning, wake up at 7, and be at school at 8. It was tough but it was also a blast,” he says. “Looking back on my life, I see there is an order to my career that I can’t explain. This hasn’t been something I could map out myself.”