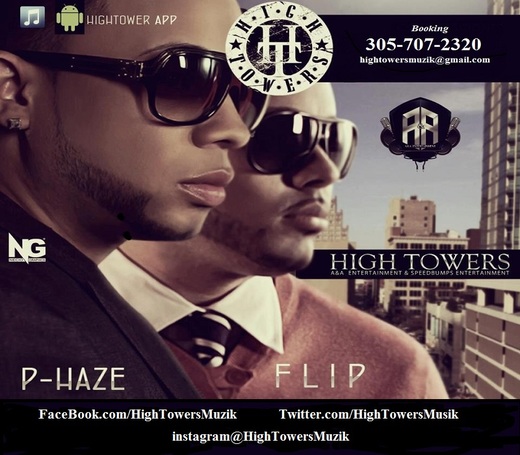 D.J Flip & P-Haze formally known as HighTower are an International Reggaeton duo,
consisting of Jose M. Martinez (D.J. Flip) and Luis Eduardo Sime (P-Haze). As one of the
motivating purveyors of "amorous and passionate reggaeton" in their city, Hightower have
carved a solid niche for themselves.

After meeting one another in 1997, the duo closely found a similar interest in music and put their
talent into a greater perspective than what they could imagine over the years. Since then D.J Flip
and P-Haze abruptly came up with their name High-Tower while living in a 3rd floor apartment,
producing beats and songs that eventually made them who they are today.
In a novel contradiction of styles, D.J Flip does most of the singing while P-Haze concentrates
on turning what was once his poetry into the bulk of the rhymes. This works surprisingly well,
D.J Flip and P-haze voices complement each other to form cohesive and harmonious melodies.
Although meant for the dance floor, be advised that the tempo remains at mid pace. Subdued, is
the word that will best describe their style.

"Cuando Estoy Contigo" , one of there more popular first singles and its increased radio play is
giving them more recognition. With it's uplifting chorus and composed rhyme delivery , the track
brings out the best in the duo. Other tracks, like "Te facina el sexo" is as catchy as reggaeton
gets. "Se te quieres marchar" and “Una carta vasia” are sensuous and inflict the right balance
of desire and regret, and are Softer and gentler than most of their contemporaries. Hightower are
nonetheless very good at what they do. Most of the music that was produced came in the form
of compilation tracks gathered together in there own apartment. Singing in small towns to local
crowds when the opportunity arises the pair have definetly made a name for themselves where
ever they go. After many years of building their fan base and positive reputation Hightower will
soon be in the works of releasing their first full-length album de su Equipo Favorito! .