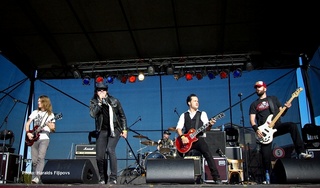 Paperback Freud is a five piece rock n roll machine that hails from Stockholm Sweden, with a notoriusly explosive live show and one simple vision: to make the best damn rock n roll ever!

Up to now they have played and been on the line up with acts like: Nazareth, Sebastian Bach, DAD, Girlschool, Cathedral, Kamelot, Jorn, Sabaton, Meldrum, Crucified Barbara, Mustach, Hellfueled, Freak Kitchen, Pleymo etc.

The band has done uncountable shows on the swedish club scene and have toured and played festivals in Europe and Russia. They have enjoyed great exposure on ZTV and MTV (culminating with a 4th place in the Nordic video top list, MTV UpNorth) as well as extensive airtime on Swedish, French and Finish rockradio

'This gets me in a really good mood. Roller could be this years big sensation' Jerry Prutz - Close Up Magazine
'A boil down of everything that..s been really good in the hard rock coctail over the last 35 years'. Daniel Berg - Sweden Rock Magazine

'There is something in the air, water, and alcohol in Stockholm, because that is the only plausible explanation for the quality of Paperback Freud's new release, Roller. They play a type of raunchy, gutter rock 'n' roll that is making a serious comeback not just in Europe, but in the United States as well. Paperback Freud is a somewhat rare find in the industry. They are skilled but not polished, the wear their influences on the labels of their empty vodka bottles yet somehow fit in to today's mainstream arena, and most importantly, they write music everyone will want to hear. Welcome Paperback Freud to the party, because they are on the guest list …' Derric Miller - Hard Rock Haven.

Paperback Freud have all the ingredients that made me fall in love with rock and roll in the first place. Sweden is rapidly becoming one of my favourite rock and roll nations and Paperback Freud is just proving the point. A cool name, great songs, and a sound that makes you want to drink more than necessary means this band is a keeper. Mark Boudreau - The Rock and Roll Report