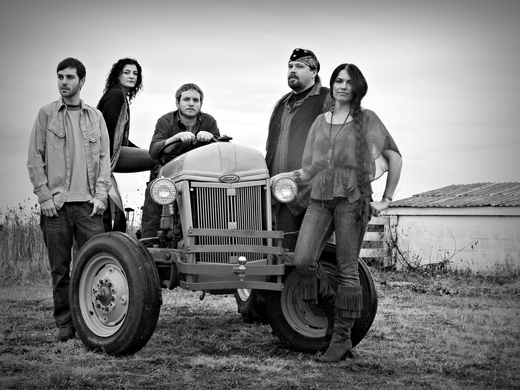 A fine blend of hard driving country soul, and gear jammin’ southern rock,  Pure Grain’s homegrown sound hints at a cross of Marshall Tucker, Bob Seger, and a little James Brown. From southern fried rock to raw funk, country hooks, and bluesy soul, Pure Grain delivers high energy live performances straight from the farm fields and rolling hills of sleepy Bright Indiana. Their unique sound continues to defy genres or categorization and has earned them props with both country and rock fans alike. The band has captivated sold out audiences, garnered mainstream media attention, and radio airplay building a devoted following nationwide that they refer to as “Growers”.

Pure Grain features the eclectic vocal and guitar stylings of Scott Siefferman, the driving percussive force of Michelle D’Amico and Brian DeBruler, coupled with the funk aspects of bassist Artie Chaney, rounded out by the soulful powerhouse vocals of Courtney D’Amico.

“With a flawless blend of southern soul, funky Jerry Reed-style country, and old school blue collar rock, Pure Grain is the real deal. These guys and gals have created their own unique sound that will appeal to music fans of all stripes.” – Adam Sheets – No Depression Magazine

These are good times for Pure Grain. Releasing their first music video, “Truckin Song”, on youtube stirred up a buzz that had them featured on Sirius/XM Outlaw Country, Road Dog Truckin and Americana radio stations across the country. “Truckin Song” is now the theme song on Dave Nemo’s highly popular Road Dog Truckin Show on Sirius XM. The video, now at 354,000 views and growing, has received airplay on the major and regional networks, and also commanded the #1 position on the Yallwire.com Top 100 for over 16 weeks.

With their brand new symbolic release, Sowing Seeds, the band continues to grow its audience, and evolve. The first single “Cowgirl” with its featured line dance, and music video has fast become an anthem for country girls round the world and the guys that love them. The song broke into the Americana Top 40 and has been the bands furthest reaching single at radio to date.

Pure Grain has toured nationwide with fans hailing from all parts of the country. They regularly perform at festivals, state, and county fairs as well as club dates, and have opened for Hank Williams Jr., Little Big Town, John Michael Montgomery, Zac Brown Band, and most recently Eric Church, and Miranda Lambert.

“Pure Grain was the hit of the 2010 Country USA…Everyone commented on the band… The promoter and I were literally blown away!” said Thomas Guenther Festival Operations Manager Country USA, 150,000 attendees.

“Pure Grain combines the Southern rock of The Allman Brothers Band, country side of The Marshall Tucker and Soul vibe of James Brown, which creates truly unique sound of their own.” says Vernon Tart of Puresouthernrock.com