PUSHER began rocking the L.A. club scene as a three piece in 2003 with Nick Cordary as frontman on GTR, Caleb Quinn on bass, and original drummer, James Lucheisi. After a few gigs they began their first recording venture on analog 8-track entitled “Founding Fathers
After recording they enlisted John Clifford on bass so that Caleb could focus on LD GTR. They performed a series of club dates and began collaborating on new material to return to the studio in 2007 to record the infamous “Oakland Sessions.”
After disposing of more drummers than Spinal Tap, they finally found a perfect fit .With Mike Bray solidifying the line up, they went on to further develop their sound and material to record the epic groundbreaking album “Global Lies.” This fusion of funk, blues, rock and metal span the musical spectrum creating one of the most memorable albums of the new millennium!

Mike Bray on Drums and VOX; John Clifford on Bass and VOX; Nick Cordary on VOX and GTR; Caleb “Kilo” Quinn on LD GTR and VOX 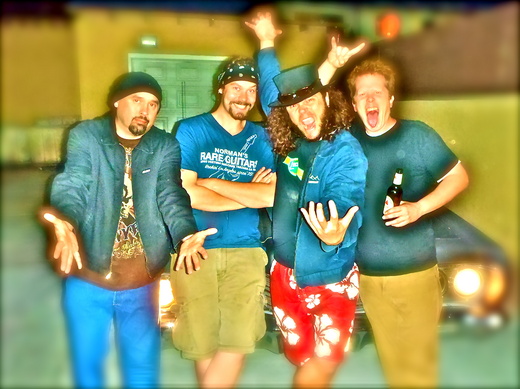