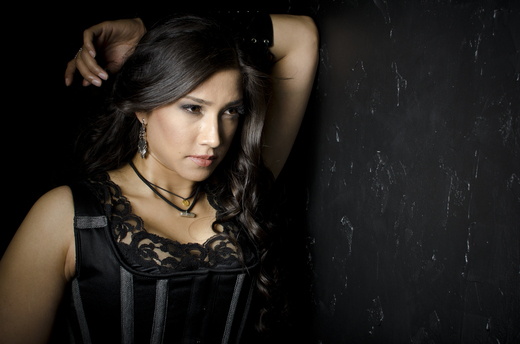 Rani Chatoorgoon was born in North York but raised in the small town of Deep River, Ontario.

Music was an integral part of her cultural upbringing and Rani taught herself to play harmonium (east Indian instrument) and to sing in a style native to her culture. In her late teens, gifted with her first guitar, she began teaching herself the basics and using that knowledge to begin writing her own songs. But it wasn’t until her early 20’s that Rani discovered her true voice, while she was attending McGill University in Montreal. Influenced heavily by Within Temptation, Evanescence and Sarah McLachlan, Rani continued building a repertoire ofsongs while completing her MBAand commencing a career in Strategic Marketing.

Finally in 2009, Rani successfully produced and financed the production of her debut album, Illusions of Loneliness. Her sound, characterized by sweeping orchestras and pounding guitars, has become the canvas she uses to paint her vision of life and the world.

Although still unsigned, Rani forges ahead with her musical ambitions and is on track to release an EP entitled, Weightless Blood, in the Fall of 2012. This EP is the realization of a dream of a fan, as it features Ruud Jolie on guitars (lead guitarist for the Dutch symphonic rock band, Within Temptation).

All Rani’s songs, including the title track from the upcoming EP, Weightless Blood, is available for purchase on iTunes. Follow Rani: