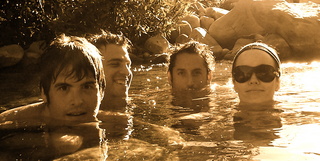 River Rouge's new CD "Dark Horse Running" provides a true alternative to the mundane: musicianship, adrenaline, meaningful lyrics and infectious melodies that resonate with the listener long after the album is over.

Singer guitarist Andre Comeau has music in his blood. Born in Detroit, MI in the seventies, Andre comes from an intensely musical family:
Growing up surrounded by music fostered an instinctual understanding of melody and song. By the tender age of 15, Andre was already a seasoned vocalist and proficient in multiple musical instruments. He was also already a regular performer in the nightclubs and rock bars of Detroit.
In 2006 he released the upbeat self-titled CD, “Andre Comeau Band”. Produced by mandolin player Jon Mesh with Randy Morris on acoustic bass and Canadian vocalist Sabrina Taylor; the barn album, as Andre refers to it, succeeded in making an impression with the local music scene.

“We made a conscious effort to make a really positive and happy sounding CD. Then we started playing a lot of morning and daytime shows, private parties and parades. Very family friendly activities, really it was so much fun!”

In 2008 Comeau recorded and released the CD, “Dark Horse Running” and changed the name of his band to River Rouge, a reference to his hometown.

“River Rouge is the other side. It's gritty folk music. It’s blue collar sand and swampy bluegrass. Where we’ve been and where we’re going.”

Toeing the line between classic and cutting edge, River Rouge are purveyors of passionate music that’s capable of seizing a listener both above and below the belt.