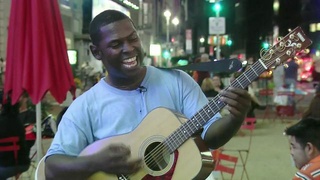 Singer/Guitarist/Songwriter Ron Wingate a former Houstonite, first picked up the guitar at age 12 and has been playing ever since. After playing in many bands throughout the South some opening for the likes of greats like Bobby Blue Bland, Ron moved to NYC in 2001 to begin a new chapter in his growth.

Faced the new challenge of finding a place in the New York music scene, he made a conscious decision to fore go seeking another sideman spot to develop his solo act. Although the road at times has been rough Ron has arrived at a new creative place in his career. He is currently in the process of writing songs for his debut CD, many of the songs are an out growth of his experience here in NYC, as will be evident by titles like, "Subway xxxxx." The rest you'll have to stay tuned for.