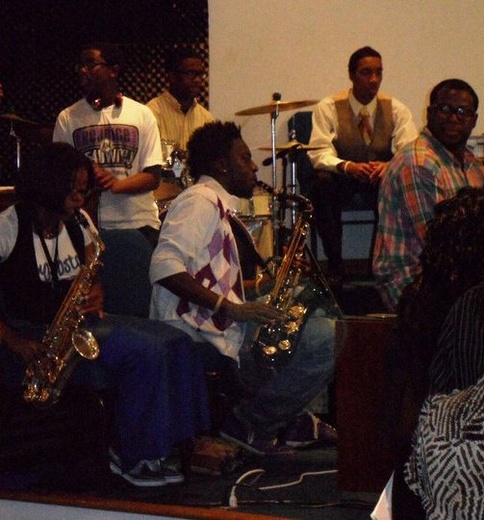 Bio: Born December 20 in Omaha, Nebraska, Sean Kelsey was brought into the world as a military child by Mr. and Mrs. Kelsey. As Sean grew up, he found himself dealing with music. Living in Germany (dont know what part), he was taught "I believe I Can Fly" by R. Kelly (off the "Space Jam" album). Sean found out that he had a love for music. After while, the family relocated to Virginia. Only being exposed to gospel by his mother, Sean grew up in the church singing songs to minister to other people and to give God the praise.
In 7th grade, Sean joined the concert band at Passage Middle School in Newport News. He started out on the clarinet. By eighth grade, he moved to bass clarinet. He was still not satisfied. Finally going to Denbigh High School, he became in love with the tenor saxophone. Even though he didnt practice much, the saxophone became close to his heart. It was tenth grade when he found his style: Jazz. Sean found himself very successful at alibiing and throwing a crazy rundown that was never expected. It seemed that he didnt even know his own talent. Sean started to take his saxophone to another level by taking it to church and playing behind the music. Most people liked and encouraged him to continue playing.
It got down to Sean's senior year, the worst thing could happen. His mother was buying another house that was located in Hampton, VA. Even though Sean was disappointed about not finishing high school at Denbigh, he still moved on. Meeting new friends at Kecoughtan High School was pleasing for Sean. He joined the Marching Warriors for the 2008-2009 school year. Sean continued to play the saxophone. His love for music was still strong, no matter the genre. He got in the jazz ensemble and made more friends that could vibe/connect with him.
Sean is currently singing, playing saxophone, piano, and bass guitar. Though going through the recession, he continues to go hard and strong everyday with many supporters behind him, haters doing the usual (hating), a family that cares, the crew, and the fans. Hoping to live life til God brings him home, Sean is truly: Sean Kellz!