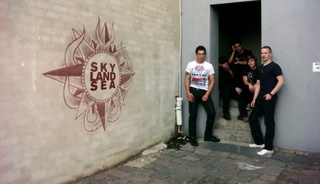 2009 is here and the Australian music scene is about to get something it’s been crying out for in the shape of a band called “SKYLAND”. This band blends raw heavy rock with sweet pop melodies that will have the likes of “Nickelback”, “Three Doors Down” or “Foo Fighters” looking over their shoulders.

Forming in November ’08 “SKYLAND” have already amassed a large portfolio of demo tracks to shape their upcoming album. Only two weeks after beginning their Studio Sessions with producer Pete Dacy (Taxiride / The Androids) and engineer Andy Shannahan, “SKYLAND” have emerged with two powerful and emotive tracks, “Bleeding Out” and “No Mans Land”. These tracks characterize this bands ability to match any music currently being played throughout Australia and across the world. The stage performance from these lads easily equals this bands recording abilities, and promises nothing less than a long and prosperous career.

If you do nothing else in 2009 be sure you make time to see “SKYLAND” live.