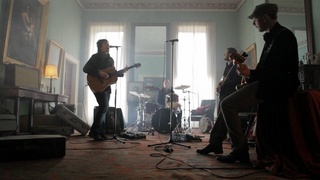 Sure, they could have put funny clothes on, posed on bicycles or held fruit in front of their faces in this photo, but that's not from where they come. The band's self released and self produced work of 2007, Travel Light, found them hitting stride with 4 of 5 stars from Hot Press in their native Dublin. They then sold out the Bowery Ballroom and played to a packed house at Toronto's 2008 North By Northeast Music and Film Festival. Now they turn it up with a return to form: guitars and voices all over the place. After demoing new songs at Grouse Lodge in Ireland last spring, STAND took up residency in a Buffalo NY studio for ten days this past summer and emerged with as many songs. Two weeks later, L.A based mix-master extraordinaire Mark Needham put his touch to it. "I'm a huge fan of these guys," Needham said. "Their music really stands out to me as a breath of fresh air in what is a very cluttered field right now."

Here they come again, and we get to hear first what can happen in so short a time, and in Buffalo of all places. Bet the night on these four players locking in to deliver with this latest effort. When they convene, a very real rock band rolls.

"A tremendous example of the fact that one doesn’t need gimmicks if you’ve got it where it counts. They’ve got harmony, they’ve got rhythm and they deliver from pretty much the first note."
2008 NXNE COLLECTION, TORONTO SUN

"Catch them in a club. The arena is where this is headed." ROCHESTER CITY NEWS