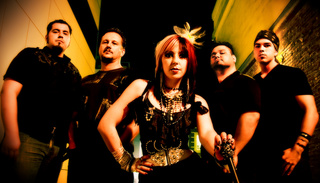 SYNN is a five piece original hard rock / metal band based out of Los Angeles, California.
The band was created in August of 2006. The current line up has been together since June 2010.
A dynamic group of seasoned, dedicated musicians and performers, SYNN continues to wow audiences with their intricate, experimental, heavy yet melodic fusion of music. Band members include Melissa Jane on vocals, Mike Status on bass, Albert Ortega and Angel Nevarez on guitars, and John Chominsky on drums.

Melissa Jane - Born in Melbourne, Australia, she made her first T.V. appearance at the age of seven and hasn’t stopped performing since. A skilled triple threat, she has performed in numerous bands and shows throughout Australia. Her most recognized international success is fronting the pop R&B group Les BiJioux in Japan, and hosting the T.V. show X-Beyond Surf on ESPN International. Trained in opera, Melissa combines her powerful voice with a captivating stage presence to create a unique “front-woman” unlike anyone else on the scene today.

Mike Status - Started as a young teenager, training in many styles of music from jazz, to rock, to metal. He is a skilled musician in bass, guitar, piano, and vocals. For 6 years he put aside the instruments to be the lead singer for several rock and metal bands. Now back to focusing on his true talent as bass guitarist, he gets to contribute his gift for singing through backing vocals. Mike’s in charge of holding the “down-low” and plays a mean 5-string Schecter bass guitar.

Albert Ortega - Started playing guitar at the age of 17. He was a star athlete, but unfortunately (or fortunately) due to a major physical injury, he came to realize his talent in making music. It was through Albert’s cousin Mike Status (bass) that he joined SYNN in the fall of 2006. Albert is very experimental with his music and creates his own individual style that grabs your attention from the very first note.

Angel Nevarez -Was inspired at the young age of 8 to play guitar by watching his uncle play guitar and from listening to his old rock 'n' roll records. He taught himself to read music and play guitar on a cheap $20 acoustic guitar. These days, he's a lot fancier with his equipment and playing style. Sometimes seen playing his axe with a violin bow or beer bottle, Angel is a very fun, skilled, and entertaining performer with influences from bands such as Tool, Perfect Circle, Vivaldi, and Villalobos.

John Chominsky - Originally from New Jersey, John studied drums at Drummers Collective in New York City and at Berklee College of Music in Boston. He played out live extensively over his 4 year stint at Penn State. A fan of all types of music, he draws influence from Rush, to Dream Theater, to Disturbed to Lacuna Coil. John is proud to endorse Pork Pie drums and Soultone cymbals. As the newest member of the SYNN family, John's steals some of the energy from his passion for ice hockey to help put the "kick" in Kick Your Ass!!!