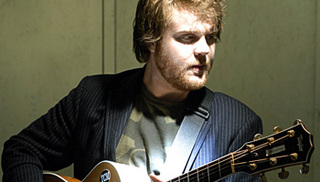 Taylor Carson, revered songsmith and noted relationship philosopher, has finally gone back to his roots with this new record, Standing Alone. True to the title, these ten tracks feature Taylor on acoustic guitar and (his debut) on piano, painting memories in brilliant hues with his conversational vocals and melodic musicianship. Standing Alone captures the intimacy of Taylor Carson’s live solo acoustic show, which he is bringing up and down the east coast to listening rooms and colleges this spring

We asked Taylor Carson "Who is Taylor Carson?" and he responded with this: "What can I tell you about me? I am a singer/songwriter and I consider songwriting to be an escape. I write from the heart and often times from what I feel other hearts are telling me to write about. My most recent release is a raw look into my overly analytical mind. It tells the stories of fear, happiness and the search for more of both.

With all this solo acoustic performing these days, people may be wondering "when do I get to dance?" Worry not your dancing heart -- Taylor Carson is still bringing the thump with his bandmates for shows in the Washington, DC and New York City areas. Yes, it is worth the trip from Philadelphia or Hartford or Cleveland -- just don’t forget your dancing shoes

Bandmates Patrick Thornton (Boogiehawg, Pat McGee Band) on bass and drummer Jamie Watkins (Ben’s Bones) are acclaimed for contagious smiles and stunning good looks. When asked about his bandmates, Taylor said this, "Patrick is the backbone, making the bass sound like two instruments in one and singing like an angel (with day-old beard stubble), and Jamie’s always making me dance -- did you know he has the ’quickest kick-drum in the east?’ -- and his theatrics on ’Lucky Tonight’ always crack me up.

Taylor’s first public performance was opening for Dispatch in New Jersey, and since he’s shared stages with Ed Robertson (Barenaked Ladies), Ellis Paul, Braddigan, and Toots and the Maytals. In response to his debut record, OnTap Magazine heralded, "Generation X had Dave Matthews, Generation Y has John Mayer and Generation Z will have Taylor Carson” and his fan community is well on his way to fulfilling the prophecy -- are you a part of it?