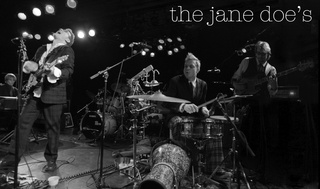 About The Jane Doe's

we don't like to talk about ourselves.... but some others do....

I envy the people of LA for only one reason: they have The Jane Doe's. The Jane Doe's are the funkiest, sexiest thing to happen to my MP3 player since I downloaded Ben Harper's "Sexual Healing" which I'd previously considered the sexiest 5 minutes of recorded music ever

My wife found The Jane Doe's on a video blog (Lonelygirl15), and within a few minutes we'd logged onto their website (myspace.com/thejanedoes) It was love at first listen. I ordered, "You Bring the Devil" immediately and waited anxiously for it to arrive, but apparently it's getting so popular that the orders were piling up faster than they could fill them

The Jane Doe's have an ethereal, funky soulful sound that simply exudes sex. Singer A.R. Tubbs' sexy falsetto captures the honesty and earnestness of Smokey Robinson and the pure id of Prince. All of this is set against a smooth, funky R & B backdrop

We're bombarded everyday with anthems to sex and love, but What sets The Jane Doe's songs apart from others is a certain mystical, almost voodoo quality. It's not just sexy, it's DEEPLY sexy. For example in "My Lady" Tubbs sings of wanting to know his partner's body so well that he can map it from memory

The Jane Doe's love songs evoke all the extremes of the emotional roller coaster that is love. From the highs in the aptly titled "High", to the lows of lows in "Sad Again." The band captures the insatiable yearning in both "Junkie" and the title song

As if the musings on love and passion weren't enough, the CD also takes a great stab at social commentary with the mellow, but scathing "Who's Kidding Who." It's a heartfelt jab at the status quo that reminds of Marvin Gaye's "What's Going On.

As laid back as The Jane Doe's are, their music jams in a way that a lot of soul doesn't. The songs are all carefully laced with Daniel Thomas' funky bass stylings and the band's impeccably tight rhythm section (Brad Colton and Ian Grom)

Their studio music is great, but their music really seems to blossom live. I can only use the word "seems" because, alas, they're in LA and I'm in Western NY and so their videos are the closest I may ever get to seeing them live, despite my constant pleas for an east coast tour. Check them out and surf over to thejanedoes.com