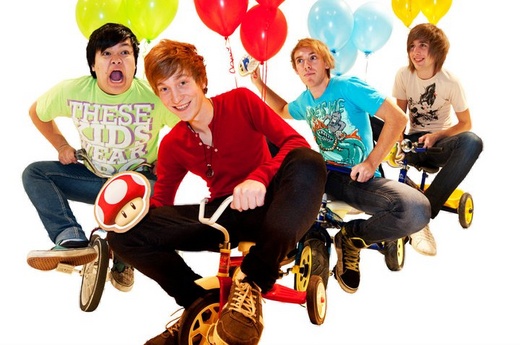 About The Kick Off

A lot of people's first impression when hearing a track by The Kick Off can be summed up as "wow, is this music really you guys?" and to their astounded faces, The Kick Off love telling people it really is. Victoria B.C.'s youngest yet hardest working pop-punkers love doing nothing more than playing music and spreading their catchy tunes to as many ears as are willing to listen.

The Kick Off formed in March 2009 when freshly graduated Jeff Hilman, Shae Scotten and Danny Burton decided they needed a fun project to do together, and that Victoria's all-ages scene needed a band dedicated to catchy choruses, memorable lyrics and putting on crazy, energetic shows kids can walk away from with a feeling of "Man, I had way too much fun tonight!".

After recruiting a lead singer in the form of Dawson Walker, they eventually caught up with bassist Luke Byers and embarked on a journey in creating music that Victoria barely knows - music that normally isn't heard on any radio station available in this city. With influences such as The Maine, All Time Low, and Forever The Sickest Kids. However, uniqueness is really what The Kick Off strives for in their writing methods, and it's apparenltly worked - in just over a year together they've already gained a massive fanbase and are being recognized across the country for their talents.

Their latest Album "Alive Together" was really the key for these boys, as it enabled them to show off industry-quality songs to newspapers, radio stations, and more. They have their producer Steve Klassen of The Sound Suite (These Kids Wear Crowns, Laurell) to thank, who helped them with not only recording the music, but with songwriting techniques in general and music industry connections as well.

With two EP's to their name and two tours to accompany them, The Kick Off has already achieved more than they'd ever imagined they could at their age. Touring the country isn't a common activity for someone 18 years of age, but they've done it. Between playing shows from Prince George to Montreal and gaining media attention such as news interviews in Sault St. Marie and air time on Kitchener, Ontario's local radio station, The Kick Off has set a high bar for themselves with every day's goal to raise it just a little more.