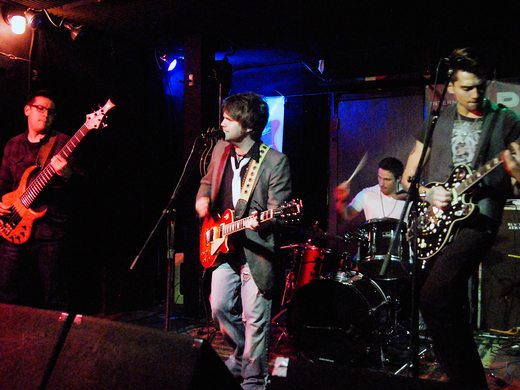 Their new singles "Turn It Up, Turn Me On" and "Settle Down Your Gun" are off of their 3 song EP titled "Turn It Up, Turn Me On". These 3 particular songs were selected from the full length CD which is due out January, 2011, because it represents the overall feel of the songs in their totality. The songs are self descriptive. They rock, they have glorious guitar riffs, very catchy sing-along verses and choruses. They are pure fun to listen to and the group delivers them big time. The 3 song EP will be released in limited edition for fans at live performances.

The Queue is surely gaining that stride â€“ that momentum that they need to succeed. They have the quality, the sound, the audience, the look and the drive that spells success.

They are currently working on a fall 2010 tour with hopes of even a bigger one the summer of 2011.

The Queue is currently working with A & R Select in West Hollywood, Ca. for licensing, publishing, a record deal and/or placement opportunities. For additional information, you can reach them at:

You can get additional information, listen to and/or purchase their music by logging onto any of the following websites: