Introduced to the Boston music scene in 2011, The Randos immediately commanded attention with their female-fronted, full throttle rock 'n' roll. Led by two accomplished songwriters with divergent musical tastes, The Randos are able to channel everyone from Stone Temple Pilots and Foo Fighters to VersaEmerge and Taking Back Sunday. The result is memorable, classic rock riffs complemented by strong vocal hooks and clever lyrical wordplay.

In the summer of 2011, The Randos translated their dynamic live show into a debut EP, We’re Not The Same, which instantly garnered radio airplay and critical praise. In the short time since the album’s release, The Randos have opened for national acts and even performed at the Playboy Mansion in Beverly Hills, California, alongside Steve Luongo, Mark Hitt and Danish pop superstar Sisse Marie. Members of The Randos have opened for artists including Fall Out Boy, Less Than Jake, Automatic Loveletter, The Dear Hunter, Socratic, Sainthood Reps and Black Gold. 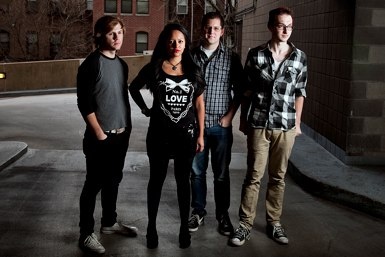