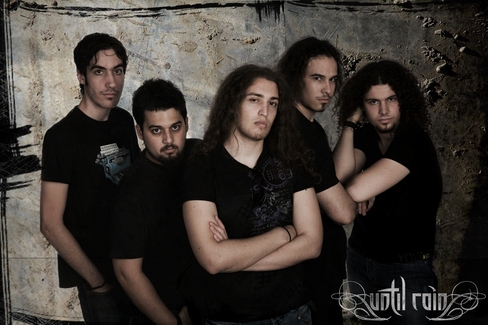 UNTIL RAIN is a progressive metal band which was formed back in 2004, in Thessaloniki Greece. The band's music is a mix of many musical elements such as prog, melodic and experimental metal, art rock, electronic music sometimes combined even with extreme metal elements

By the end of 2008 they had completed the song writing process for their debut concept album, ‘’THE REIGN OF DREAMS’’. The album was recorded during the first months of 2009 at Fragile Studios in Athens. Its concept concerns dreams, but its scenario could be a real and adventurous life story. It deals with the struggle of a man realizing his actions and sins during a voyage inside a Dreamworld. The rest is to be discovered by anyone listening to the whole album.

In July 2009 Until Rain signed with Steel Gallery Records for their debut release. One and a half year later the band’s new EP is out in stores. It’s entitled “PANDEMIC” and consists of 4 new songs and 4 bonus tracks (acoustic versions, radio edits etc). It actually gives a taste of Until Rain's upcoming full release, blended with 2 tracks from the past, sounding heavier than the first album and more mature.

At present, Until Rain is already working on new material for their next album, as well as seeking for live opportunities to promote their work on their two releases.