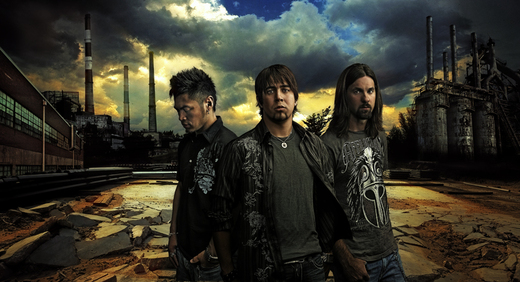 ven·ture
n.
An undertaking that is dangerous, daring, or of uncertain outcome. A business enterprise involving some risk in expectation of gain

"...Well I can clearly see that you've got what it takes to accomplish your dreams...In the end, it all comes down to the songs. No one in the world can deny a great one." Mark Tremonti of Creed / Alter Bridge

These are the words that inspired founding member Blake Self to form the band known as VENTURE. After graduating high school, Blake received a hand written letter from his greatest idol. CREED was ruling the airwaves and topping the charts, and their lead guitarist, Mark Tremonti, took the time to write a personal letter to one of his biggest fans.

The wheels were put in motion...the stage was set...VENTURE exploded onto the rock scene from literal obscurity in 3 short years. Their debut CD, THE PRISONER, has already caught the attention of many on radio, and now their live performances are creating quite a stir in the music industry. " Who are these guys?" is the most often asked question.

Blake Self, , Michael Barnes and Vin Abadie have formed a powerful alliance, and are poised to take their music to the next level. "It's been a long journey so far, and we have so many hurdles to overcome," says lead singer/guitar player Blake Self.

VENTURE was fortunate to work with some amazing producers on their first album. Justin Thomas (Faktion), Brett Hestla (Creed, Dark New Day), and Beau Hill (Ratt, Warrant, Winger, Alice Cooper, Bob Dylon) all have contributed greatly to their success. "Brett has been instrumental in shaping our sound, and his ideas and suggestions always have a huge impact on our overall sound...he really is an amazing guy!" says Blake.

THE PRISONER was released in September 2007, and their title track, The Prisoner, gained instant praise and acceptance in the radio community, exciting DJ’s on radio and on the world-wide web.

On July 18th, 2007. VENTURE opened for GODSMACK in Dallas TX, and they were received by over 4000 enthusiastic fans! VENTURE was hand picked to open the show, and just two bands were on the bill...VENTURE + GODSMACK!

Recently, VENTURE licensed their music from THE PRISONER cd to be featured on upcoming UFC events, Spike TV,Versus Channel, and The Ultimate Fighter Series. Their song, IMPOSSIBLE, was featured on the hour long special, Countdown To Ultimate Fight Night 14. WITHOUT A DOUBT was featured in entirety on The Versus Channel's World Extreme Cagefighting, WEC 36.The band’s song, GOODBYE, has been licensed in film on the web cast horror series, TV FACE. IMPOSSIBLE has also been featured in SLED HEADS 4 from TAHOE FILMS, an international extreme winter sports series, filmed in Hi-Definition TV. They have continued their inclusion in film with 4 more songs included in the next Tahoe Films project, MOUNTAINS AND MUD 4. Lastly, the band has an informal clothing endorsement with Doctrine Apparel from Los Angeles, CA.

The band is currently finishing up production on 5 new songs, once again working with the amazing Brett Hestla and Beau Hill.

Look for a new EP launch in January '09!

Check out and purchase their music online by visiting their websites: www.myspace.com/venture or www.ventureband.com

Distributed by www.CD Baby.com and iTunes