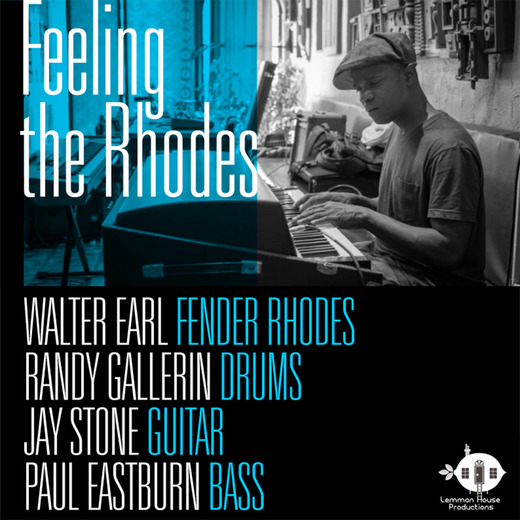 Walter began his career in Dallas, Texas, where he studied with some of the best Jazz musicians around, such as Claude Johnson, Ken Boome, Kenny Kirkland, Joe Sample, and Herbie Lewis, who was often featured in the Walter Earl Quintet. Together they played with other legends, like McCoy Tyner, Lee Morgan and Joe Chambers.

But it was producing his debut album “Fly”, that it quickly became clear Walter was not just another studio musician. His sound was a new genre of music, “Bay Area Cool,” featuring a seamless blend of Jazz, Hip-Hop and Retro Soul.

The following year Earl produced his sophomore effort, “In the Middle of the Crowd,” demonstrating an even greater musical maturity. With this album, Walter maintained the Jazz motion and unique spirit of “Fly” while drawing from classic elements of Hip-Hop and R&B. The result was, both, refreshing and startlingly sophisticated.

“In the Middle of the Crowd” attracted the attention of Grammy Award-winning producer Narada Michael Walden, Felton Pilat of ConFunkShun, and the late Richie Havens, all of whom invited him to work with them. Over the years, Earl has also collaborated with Victor Phazz Clark, Bernard Wright, Marqueth Blackman, Kenneth “K-Phlx” Manning, Shadow Skillz and Erykah Badu. Other impressive names in the San Francisco landscape included: DJ Scott Hardkiss, DJ Romanowski, DJ Hunter Smash, Ron K, The Funkanauts, The Top Four Flights, The Crack Emcee (The Beatnigs, Broun Fellinis, Consolidated) Max MacVeety (drummer for the Crown City Rockers) Goapele, Zion I, Ricardo Scales, Juan Escovedo of the Escovedo Family, and many, many more.

Earl finally moved his “Bay Area Cool” to San Francisco in 1997, ready to take The City by storm. Demand for him grew quickly as a studio maven, and he often shared his talents with producers at Radical House and Tarpan Studios.

It was in San Francisco where Earl’s third album, "The Fillmore Connections” took flight. This release was another eclectic mix of smooth Jazz and Hip-Hop Soul, but now with Walter singing lead, bringing to mind such greats as Leroy Hutson and Joe Sample.

To this day, Walter’s musical appetite continues to be insatiable. As a San Francisco producer, his name has appeared on at least a dozen albums, including the soundtrack for the award-winning film, “SideTrack,” and as composer/sound designer for The Burning Monk Collective, under the direction of Peter Grigg. He also formed a musical pairing with Bay Area legend, Roman Pierre Federico, AKA Romanowski, and became known as Royal Earl. They produced what became known as the "Together/Alone" albums, with Royal Earl as a trifecta of Soul, R&B and Pop.

It's most notable single is "Don't Let It Get You Down", featuring guest MC Deuce Eclipse. There's also the single, "Hungry," featuring guest lyrics from Freestyle Fellowship's Mic Master P.E.A.C.E., who has the ability to make anyone stop and think about what's really going on. "Hungry" was released in 2010.

Earl’s single, "Fly," later was resurected to became a hit on his performance album, "Live In San Francisco." The song was eventually used as the lead-in music for "Smooth Jazz High Definition," a TV pilot hosted by Miranda Wilson.

To put it succinctly, Walter Earl is a genius of epic proportions - a true force of nature - but with musical transcendence erupting from his fingers as lightly as butterflies fluttering their wings. Be there or be square: Walter Earl's sound is everything you hope music can be.