Her artist name is kharYsma Arafat-NZABA with Y character.He is part of the generation that counts in urban music culture in the international landscape.He start her music carreer on 16 years old, when he create her first music label; and release a featuring call: Orphelin ; and a pièce of her songcall: Que ta volonté se fasse, ranked number 1 during 8 month on internet chart.He then paused his music carreer to devote himself to his studies where he obtained a master's in finance.In 2012; it takes advantage of the new France-town musical environment to launch its first solo album: Inattendu, who was very professional and much appreciated by professional music labels.Critics, congratulations and featuring resquest tributary; his music was on air as international radio rfi,and more... his fanbase is increasing day by day with internet émail newsletter, the concert (showcase) hall was full in Paris,when he launch her first solo album produced by GBT/Klym record; and some of his music are ranked in the top 10 on the internet chart like reverbnation; OurStage and more ...His voice counts, her music style is single now; and kharYsma gaining more and more respect in the music industry in france and on the world... He become officialy international when he releaseda music compilation with American artists in: Hot urban music collection cd on 2014,and he released a dance version of the title:Inattendu; in track 1; which is broadcast throughout the summer 2014 night club in France,and recognized on usa and suede.Our international artist decides to become more professional with the MAJOR LABEL music distribution ; offering some of its hidden directory; shaped instrumental to launch the album: Mixtape beat by kharYsma volume 1;in 2015 to prove that it is always present; and the disc was performed by himself; but still produced by gbt/Klym record.He tells us a disk is full of surprises; where everyone can imagine what could have said kharYsma artist on each music; and or other musicians; can if they want, doing covers of his instrumentals with their own lyrical; while respecting the copyright.kharYsma Arafat-NZABA, subsequently wishes to release other studio album like Inattendu, and prepare volume 2 of music beat by kharYsma but for now; Take your headphones, dj plug the platinum; becaufe success will be waiting for you on the dance floor,radios and we also hope in the stores. 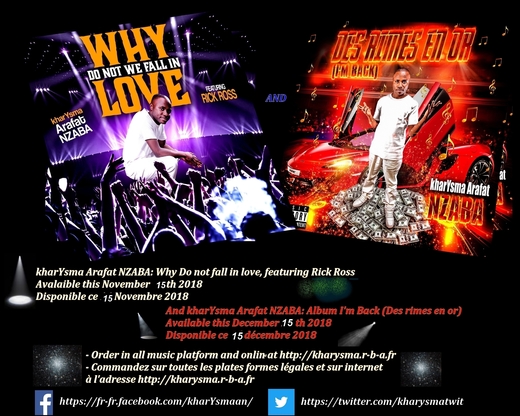