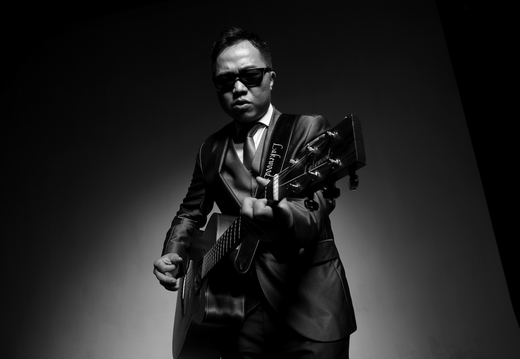 Sandhy Soendhoro, also known by his stage name Sandhy Sondoro. The multitalented singer-songwriter and musician was born and raised to a musical family in Jakarta, Indonesia, where the house provided American pop, folk, jazz and blues tunes everyday.

Sandhy's love and passion for music started at a very young age. As soon as he graduated high school, at the age of 18 he left Jakarta for California to visit his uncle and stayed there for a while with dreams of launching his career as a performer. Those dreams got put on hold when he had to go to Germany to study architecture. He first had to improve his German proficiency to be admitted at the university. During his time in Germany, Sandhy "changed" his last name from "Soendhoro" (new spelling : Sundhoro) to "Sondoro", because many people had difficulties in pronouncing it. He also explained that Sondoro means "The Sound of Gold" in Latin. On his birth certificate and other official documents, his last name remains as "Soendhoro".

Sandhy Sondoro's music is influenced by American and British rock legends like the Beatles and Led Zeppelin. The power of his voice reminds us of Curtis Mayfield, Bobby Womack, Marvin Gaye, John Mayer and Michael Bolton. Sandhy sings ballads which express love and his longing for peace. When singing rock songs his voice can
turn into a powerful volcano that sounds like Joe Cocker or Roger Chapman. Sandhy's voice is so flexible that he is sometimes called the Ben Harper of Jakarta.

In Germany, Sandhy joined a band in his campus where they mostly did covers of Van Halen, Mr. Big or The Black Crowes, but they rarely appeared on the public stage. Later, he decided to find a job as he lived alone and needed to earn some income. He then got a job in a grocery store, but the passion and dreams for singing and playing the guitar was stronger than the drive to work in an office. On his bicycle back to his apartment, he saw a busker on the street and asked if he could join him. The busker agreed, so Sandhy borrowed his friend's guitar and started playing on the streets of Biberach an der Riss. They got 50 deutschemarks in an hour and shared the money. They played three times a week before he decided to do it alone. He'll do anything to get people's attention to notice his music, said the big fan of Ray Charles.

In 1998, Sandhy moved back to Berlin and started singing and playing the guitar in bars, clubs and metros. His famous song "Down on the Streets" was inspired by his experiences in the Berlin metros. He also performed in famous theatres like the House of World Cultures in Berlin and some music festivals such as the Bode Museum Isle Festival. In 2005, Sandhy performed in "Berlin for Asia" a charity concert for the 2004 Indian Ocean earthquake and tsunami
victims. Sandhy then found a wider audience through Stefan Raab's casting show, a popular segment within one of Germany's most successful late night shows SSDSDSSWEMUGABRTLAD.

Not long after releasing his first single "Down On The Streets", on April 25, 2008 he published his debut album Why Dont We. He is well-known for winning 8th in the New Wave International Contest of Young Pop Singers in Jurmala, Latvia, from July 28 to August 2, 2009. Surprisingly, eleven from twelve-judges gave him the highest score of 10 points and only one judge gave him 9 points in the final round competition.

On August 2008, the Indonesian Embassy in Berlin bestowed him a medal of honor "Satya Lencana Karya Satya" for his great efforts in contributing world achievements for the country. Sandhy Sondoro has been sharing his gift in music ever since.