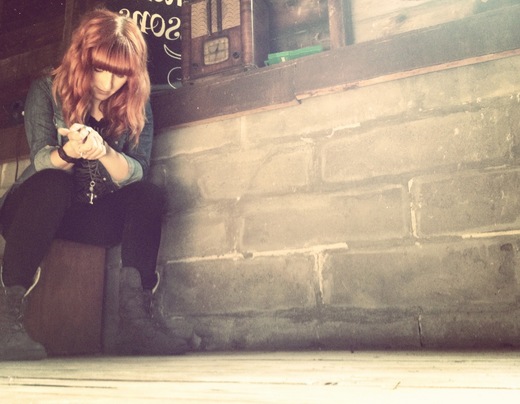 It’s mid-morning at a trendy Toronto breakfast joint. Sarah Cripps lives just a stone’s throw away from the Parkdale eatery where we’ve sat down to talk about her debut album Change. For now, though, we’re caught trying to order breakfast from a waiter who can’t hear us over the din a hectic brunch service.

“How are you guys doing today?” He smiles, filling cups of coffee and glasses of water.

Sarah smiles genuinely, “Doing great, thanks. And you?”

He stops and looks at her; seeming half unprepared to answer the question and half confused by it. “Wait, I’m sorry,” here he inserts a dramatic pause. “But did you just tell me there’s no autotune?”

An enormous laugh escapes Sarah, and in a moment the waiter’s confusion dissipates, replaced by slight relief that he most likely misheard her.

After we order, Sarah takes takes a prolonged, pensive sip of coffee and thinks aloud, “Well, actually he wasn’t entirely wrong about there being no autotune, was he?”

And it’s true. Within his mondegreen, our waiter has hit on exceptional grain of truth about Sarah Cripps as a musician - the music industry can gorge itself on all the autotune it wants, but it isn’t going to be getting any of it from her.

If that sounds like a declarative statement, it’s because it is. Take one listen to Change and you’ll have all the proof you need that Sarah is the real deal, a powerful emerging talent in the mainstream country realm.

While Sarah Cripps is seemingly coming out of nowhere - armed with a formidable debut record that is poised to give the country music world a healthy dose of old-fashioned grit that it’s been missing - don’t be mistaken; even though she’s barely entered her 20s, it’s been a nearly a decade-long journey to get where she is today.

Before she’d entered high school, Sarah had played at every available venue in - and around - her hometown of Brighton, Ontario. “I am not even kidding when I say that I was nine years old and booking shows at any and every place I could within a 100-mile radius of Brighton,” Cripps laughs as she recalls her early days onstage. “If there was a stage and a mic, I was going there and I was going to play no matter what.”

It’s that gumption that has allowed her to lay the foundation of her career from the ground up based on a bona fide country sound that’s raw, real and completely of her own design. That’s not to say the industry hasn’t tried to build her into something of it’s own design. When she was just 13, Sarah played one of her first breakthrough shows at the Legendary Horseshoe Tavern in Toronto, which she parlayed into a residency gig at the Gladstone Hotel. Sarah’s enormous soulful voice and unique musicality made the collective music industry’s jaw drop.

“I met some great people at labels who really seemed to love my music, but it’s just that nothing ever fit like a glove. I had always promised myself that my career had to feel that way - like it was going in a positive direction, and I always felt 100 percent in the driver’s seat.”

Feeling pressure to conform to a sound that wasn’t truly her own, and worried that she was being rushed into completing an album too soon, Sarah made the difficult but necessary decision to dedicate herself to becoming a completely independent artist, putting out her music on her own terms.

“That was a turning point,” she asserts. “That’s when I felt like, ‘Okay, I am a strong musician and I know I can make this happen if I just trust myself.’ And sure enough everything began coming together.”

The pieces of the puzzle began to fit together when Sarah was introduced to producer David Martin at a chance meeting arranged by Sony Publishing. Neither of them headed into the meeting with any grand expectations but fate had other plans, stepping in to introduce Sarah to the producer who would become her most trusted long-term collaborator.

For Martin, collaborating with Sarah has been a privileged glimpse at the evolution of a tremendous talent. “The funny thing is, even when I first met her she was this feisty, brave kid that was determined to make music and wasn’t going to take no for an answer,” says Martin.

Together, Sarah and David collaborated on an EP, which she released completely independently in 2011. After pounding the pavement by touring Canada three times and knocking down doors at radio stations across the country, her debut single “Practice” became and indie country hit.

Martin says witnessing this transformation in Sarah - from burgeoning singer to hardworking artist - has been a revelation, “Now we have worked together for at least five years and I have seen her grow into a confident artist, a really strong songwriter and performer with her own idea of who she wants to be. Sarah has so much heart. She is brave. She works harder than most young artists I see. ”

Sarah echoes the sentiment when she discusses the road leading to this new record, saying, “The songs on Change run through a huge amount of my history and what I was experiencing during really significant times of growth in my life. I am inspired by moods and I don’t want to be afraid to take a risk with what I am writing, I want to go wherever the song takes me.”

If the risks were big, the musical reward has been equally huge. Change offers a massive dose of country that’s enriched with clever nods to her pop and rock influences to defy the constraints of standard genres.

For Sarah, what makes Change a once-in-a-lifetime record is that it chronicles an enormous span of her life and is candid snapshot of her growth and evolution. It’s also an album that brims with spontaneity and an in-the-moment intensity that’s reminiscent of the complexity of classic albums like Fleetwood Mac’s Rumors, which was a huge influence on her.

“Rumors is an album that I felt paralleled a lot of what I was going through, and the emotional intensity of it was something I could feel flowing into my own music,” Cripps explains.

While the release of her full-length debut brings Sarah to a huge career milestone, she realizes that with it she is also just getting started. Now comes the next step into the great unknown. So what does she think lays ahead next?

The morning breakfast rush has subsided slightly as we’re rapping up our conversation. The waiter sweeps by to refresh our coffee and Sarah looks down into her cup as if divining for an answer. “I’ve made a record I am really proud of, a record that is a complete picture of who I am. And while putting myself out there is equally exhilarating and terrifying: more than anything I just want to share what I’ve been working on for so long. I’m excited for people to hear it, and I just want to run with it as far as I can go.”