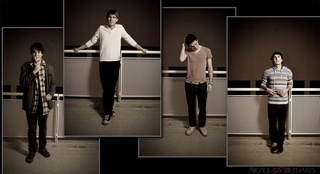 About Walk the Moon

"We're venturing into unmarked regions of the map with these songs," says guitarist Eli Maiman, "but we're leaving breadcrumbs along the way so people can follow us."

WALK THE MOON's new album, 'TALKING IS HARD', is a bold statement from the band known for their blissful, quirky brand of rock and roll.   Fueled by years on the road and now emerging from months in the studio, WALK THE MOON are clearly unafraid to bear their hearts and their ambition.

Formed in Cincinnati by singer/keyboardist Nicholas Petricca, WALK THE MOON built up a devoted following on the strength of their ecstatic live show and their undeniably infectious single "Anna Sun.”  A relentless touring machine with an ever-snowballing family of fans, the band quickly graduated from Ohio club scene favorites to an international force to be reckoned with. They hit the late-night TV circuit with performances on Letterman, Fallon, Conan, and Carson, played for massive crowds at Bonnaroo and Lollapalooza, and joined the likes of fun., Pink, Panic! At The Disco, and Fitz and the Tantrums on the road in the US, UK, and Europe.

In concert, it’s clear that WALK THE MOON’s live show is not a spectator sport.  Instead, it’s an interactive celebration of life and love, a communal commitment to joy and living in the moment. Onstage, Petricca leads audiences in a mass exorcism of the things that bring them down, casting out the demons of doubt and insecurity with hands raised to the sky.

But when the band finished touring in support of their self-titled 2012 RCA debut, Petricca found something entirely new on his hands: time.

"We went from three years of constant movement on the road to having six weeks where we could set everything else aside and focus strictly on writing,” he explains.

The band holed up in a repurposed Masonic Lodge in Dayton, KY, which housed graffiti artists, screen printers, and photography, not to mention secret rooms, ghosts, and taxidermy.

"It was like an art-commune-rock-and-roll-b&b," says drummer Sean Waugaman. "There were old artifacts the Masons left behind.  The place looked like something out of 'Eyes Wide Shut.'"

Setting up directly beneath a massive spotlight that had once shone down on a ceremonial altar, WALK THE MOON launched into writing an entire album from scratch for the very first time as a band.  Clocking in 14-hour days for weeks on end, the band pushed themselves beyond any previous creative limits with an audacious sense of abandon.

“We’d never had an opportunity like this before,” bassist Kevin Ray points out.  “We were able to live and work in a really creative space - just the four of us.”

After six weeks of these marathon writing sessions, the band relocated to North Hollywood, where they entered the studio with producer Tim Pagnotta (Neon Trees, Tokyo Police Club).  What followed was more than two solid months of recording, the band eager to reach new heights with the album's production.

"The drive to do something special was so intense that we actually started a song at 6pm our last day of tracking," remembers Maiman. "We ended up working through the night because everyone felt like what we were doing was so important.  We didn’t leave the studio until after the sun came up."

The results speak for themselves.  Lead single "Shut Up And Dance" is an undeniable pop-rock anthem.  An ode to freeing yourself from the shackles of self-consciousness and embracing the present, it's already a live favorite, with a sing-along chorus that works audiences up into a frenzy.

But, as the band warns, listeners who delve deeper into 'TALKING IS HARD' will find themselves in wild, uncharted territory.  Raw vocal performances, heavy rock riffs, new wave quirks, and stylish percussion make for a futuristic marriage with lyrical themes of self-empowerment, growth, and survival.  "Work This Body" howls defiantly for physical and mental relentlessness with Mercury-like flamboyance, while "Down In The Dumps" shouts "tough love!" in the face of depression on a careening robot-rock runaway train.

Meanwhile, in a hushed voice, "Aquaman" tenderly tells the story of a reluctant, victorious romance.  Finally, on "Up 2 U," perhaps the band's most adventurous - and ferocious - song to date, Petricca examines a non-romantic relationship:  ours with the planet.

"What we've ended up with is a bunch of really committed, confident shouts into the darkness," says Petricca.

As they return to the road, WALK THE MOON is finding that the darkness is full of eager fans and soon-to-be-converts, all shouting back, singing along until the lights come up.