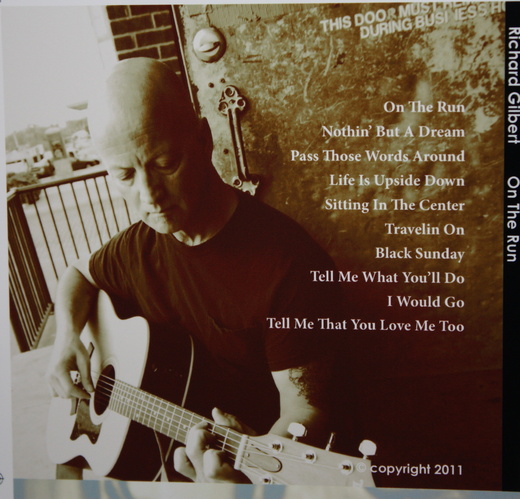 I consider myself a songwriter first and a singer second. I love writing about life, and all the things I have exoerienced in it. I started taking my songwriting seriously in 2003. Through the influence of my sons I started playing in public and am looking to tak my music on the road.

It’s ‘man with guitar’ time again (as a certain Mr Carroll often says) – that’s one man writing, singing and playing. This time it’s‘On The Run’ from Texas-born Richard Allen Gilbert. Actually, it’s a touch more than one man as Michael

Purser adds some inspired violin accents to Richard’s songs. The bottom line is this – it’s one man’s album of timeless acoustic songs equally at home from this year, last year or thirty years ago.

I’m told by artists that release their own work that it takes courage to let loose your songs to the world. You ache that your music will to get to people. You pour your soul into the lyrics. You lay bare your heart in their performance. You throw your songs out there and hope no one treads on your dreams. No fear of that here - Richard Allen Gilbert writes insightful lyrics, sings evocative songs and plays guitar with an unpretentious yet precise style. This one’s going to get you for sure.

His laconic, almost nonchalant vocal delivery belies the intensity of emotion wrapped up in the songs. These tunes fall easily to your ears and lead you into the depths of the stories Richard tells so well From the restless questing of‘On The Run’ through the reflective ‘Nothin’ But A Dream’ to the dark sadness of ‘Black Sunday’ and the quiet memories of ‘I Would Go’ – these are soul-soothing songs that will stand the test of time. And yet Richard’s an unsigned artist – you have to ask why, is there no justice